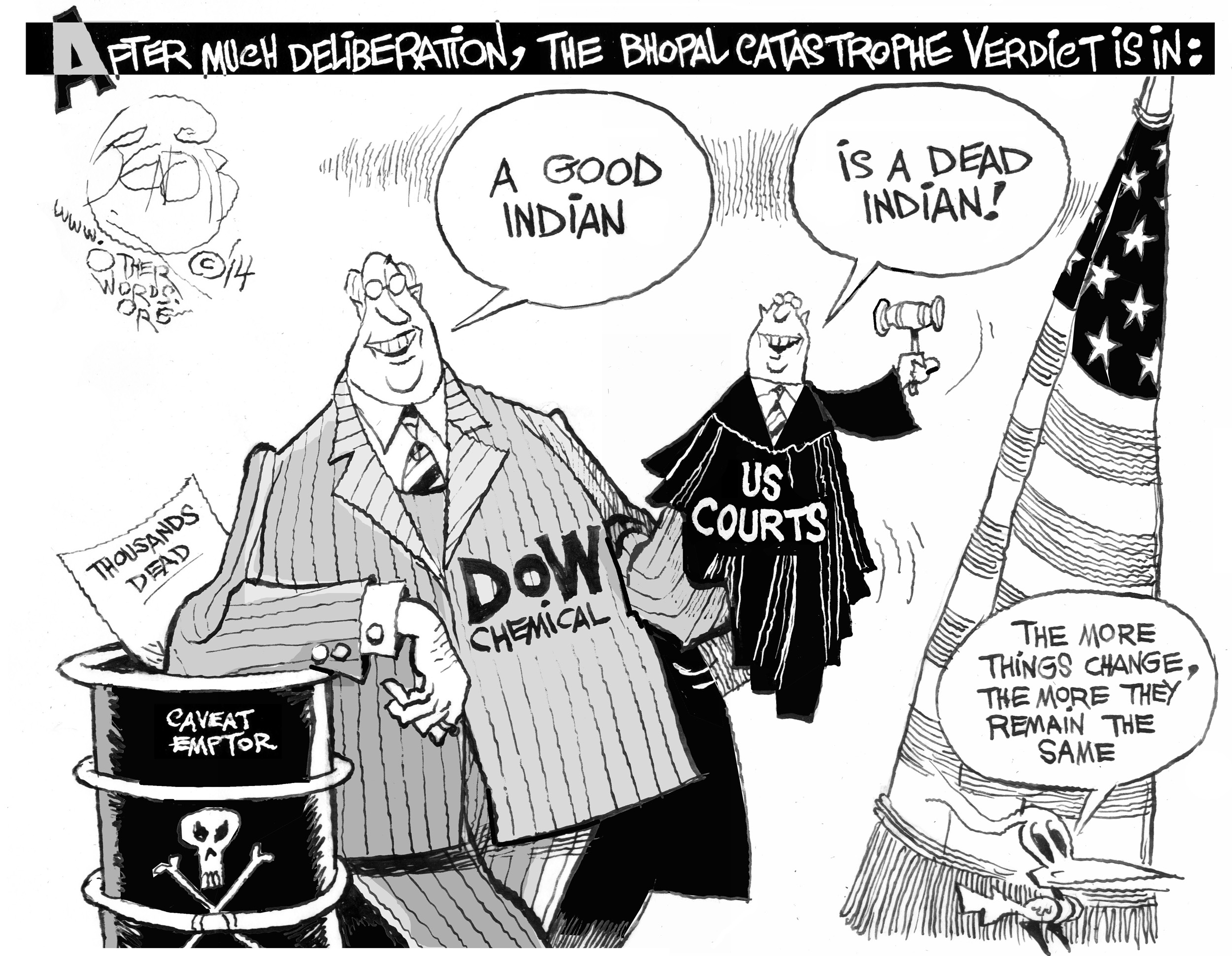 Handing Down the Bhopal Verdict, an OtherWords cartoon by Khalil Bendib

The night of the industrial disaster is forever seared into the memory of the people of Bhopal, India. Heavy clouds of methyl isocyanate — a deadly toxin — and other gases engulfed crowded shantytowns, the railway station, and surrounding settlements after a runaway chain reaction at a pesticide plant. Thousands of people died immediately and tens of thousands more have died since from illnesses related to the chemical exposure.

Nearly 30 years after the horrific pre-dawn hours of December 3, 1984, residents whose groundwater continues to be contaminated by chemicals leaking from Union Carbide’s abandoned industrial complex are still getting sick and fighting for justice. 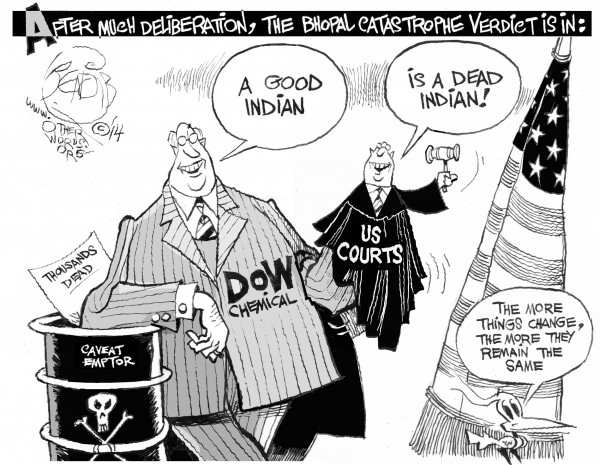 Handing Down the Bhopal Verdict, an OtherWords cartoon by Khalil Bendib

Unfortunately, a U.S. court has once again blocked their quest for justice. A new ruling is again allowing Union Carbide, a wholly owned subsidiary of Dow Chemical Co. since 2001, to dodge accountability in the United States.

Astonishingly, the court simply didn’t care. Couvaras’s own testimony about the company he worked for is “unsubstantiated,” Keenan decided. Instead, Union Carbide’s statements that Couvaras worked for its subsidiary were “conclusive” evidence. If you ever thought you knew your own employer’s identity, think again — your testimony on that subject isn’t even really evidence.

I lead the EarthRights International legal team that has brought multiple suits against Union Carbide since 1999. So far, none of our lawsuits have brought justice to the people of Bhopal. To see yet another attempt be dismissed by U.S courts is heartbreaking.

The victims haven’t fared much better in their own courts. In 1989, Union Carbide settled a lawsuit in India, giving the victims and their families about $500 each — scant compensation for loss of life or lifelong illnesses.

In 2002, a few years after Dow Chemical acquired Union Carbide, a spokesperson for the chemical giant infamously remarked, “$500 is plenty good for an Indian.”

Earlier this summer, Dow refused to appear before the District Court in Bhopal to face charges related to the new contamination at the site of the pesticide plant’s ruins. Adding insult to injury, Dow has tried to sue Bhopal activists four different times in Indian courts over their continued protests against the company.

In 1999, EarthRights International assisted Bhopal residents in filing new class-action suits in U.S. courts against Union Carbide over the remaining contamination, seeking a cleanup. One of those cases was dismissed by the Second Circuit Court of Appeals last year. The court acknowledged that the plaintiffs “may well have suffered terrible and lasting injuries from a wholly preventable disaster for which someone is responsible” — but it refused to place any of that responsibility on Union Carbide.

After the Bhopal debacle, Union Carbide packed up and left a mess that’s still poisoning residents and their environment, and its mess is now Dow’s problem. People living near the plant continue to suffer physical ailments, live on contaminated property, and drink poisoned water. Not only have the victims been denied justice at every door they’ve knocked on, they have also been sued for seeking justice in the first place.

But the fight for justice continues — we aren’t about to give up. We will again appeal Judge Keenan’s ruling to the Second Circuit, hoping that that court will recognize Union Carbide’s obvious role in the tragedy at Bhopal. And we will assist people in India who continue to fight for accountability in that country’s courts, taking the fight to Dow in the United States if necessary.

After 30 years, justice is long overdue.