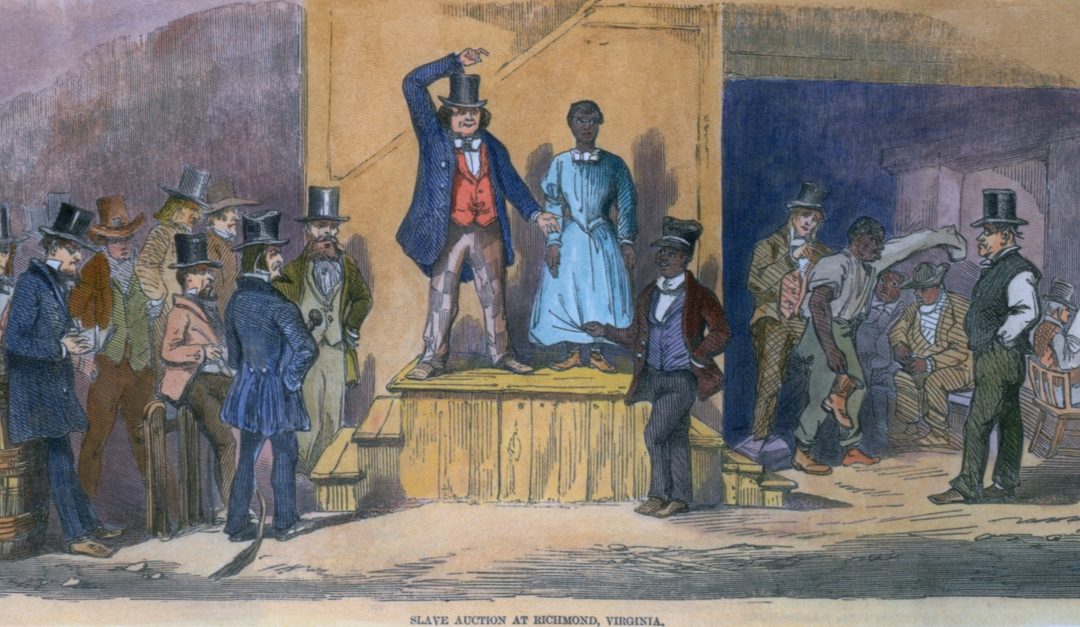 A slave auction in Richmond, Virginia, 1856. While slavery is often regarded as long-ago history, it was integral to shaping our economy -- and its inequality -- today. (Shutterstock)

It’s time to heal the deep wounds of racism — not only to ensure equity for African Americans, but for our entire economy.
By Jessicah Pierre | August 21, 2019

Four hundred years ago this month, the first enslaved people from Africa arrived in Virginia.

Slavery is often reduced to a crime of America’s long-ago past. But enslaved labor created the backbone for America’s capitalistic economy, allowing it to grow into — and remain — the world’s leading economy today.

Although slavery officially ended in 1865, the unequal treatment of African Americans continued through Jim Crow, red lining, and mass incarceration, among many public policies. Our country’s historic racial wealth disparities continue to be perpetuated and increased by the trend towards extreme inequality in the United States.

To further paint a dire picture, a report released earlier this year by the Institute for Policy Studies found that between 1983 and 2016, the median black family saw their wealth drop by more than half, compared to a 33 percent increase for the median white household.

Our economy is still thriving off the backs of African Americans and other poor people. While black wealth plummets, the number of households with $10 million or more skyrocketed by 856 percent during those years.

On the other end, 37 percent of black families have zero or “negative” wealth, meaning their debts exceed the value of their assets. Just 15 percent of white families are in the same position.

The racial wealth divide is an issue that affects all Americans — and the overall health of our economy.

As the black population increases, low levels of black wealth play a key factor in the overall decline in American median household wealth — from $84,111 in 1983 to $81,704 in 2016. Across all races, the number of households experiencing negative wealth has increased from one in six in 1983 to one in five households today.

Many conversations around the depletion of black wealth point towards false narratives about the work ethic of African Americans. This is a myth — studies show that college-educated black families have less wealth than high school-educated white families. And single-parent white families are twice as wealthy as two-parent black families.

The Institute for Policy Studies concludes that these outcomes are not the result of individual behavior, but the result of black Americans having fewer resources to begin with — resources they’ve been denied for 400 years, ever since the first slaves were kidnapped from Africa and brought to America to provide free, strenuous, and valuable labor.

By creating a formal commission to study the issue, lawmakers can take a serious look at what reparations for descendants of enslaved Africans in America could look like. Inaction — or worse, repeating the same mistakes that led to this situation — will simply widen the divide and create greater economic instability for the country at large.

Four hundred years later, it’s time to stop putting a temporary bandage on the painful and relevant history of American slavery. It’s time to heal the deep wounds of racism and inequity once and for all.

Not only to finally provide African Americans with the economic equity they deserve, but to ensure the health of our economy for generations to come.