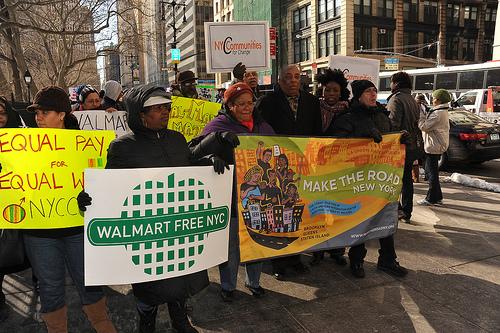 Sam Walton opened the first Walmart store in Rogers, Arkansas, 50 years ago this month. Sprawled along a major thoroughfare outside the city’s downtown, that inaugural store embodied many of the hallmarks that have since come to define the Walmart way of doing business. Walton scoured the country for the cheapest merchandise and deftly exploited a loophole in federal law to pay his mostly female workforce less than minimum wage.

That relentless focus on squeezing workers and suppliers for every advantage has paid off since July 1962. Walmart is now the second-largest corporation on the planet. It took in almost half-a-trillion dollars last year at more than 10,000 stores worldwide.

Walmart now captures one of every four dollars Americans spend on groceries. Its stores are so plentiful that it’s easy to imagine that the retailer has long since reached the upper limit of its growth potential. It hasn’t. Walmart has opened over 1,100 new supercenters since 2005 and expanded its U.S. sales by 35 percent. It aims to keep on growing that fast. With an eye to infiltrating urban areas, Walmart recently introduced smaller “neighborhood markets” and “express” stores. 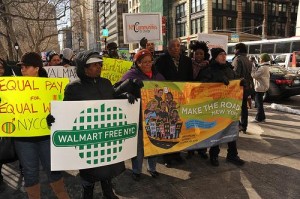 While the big-box business model Sam Walton pioneered half a century ago has been great for Walmart, it hasn’t been so great for the U.S. economy.

Between 2001 and 2007, some 40,000 U.S. factories closed, eliminating millions of jobs. While Walmart’s ceaseless search for lower costs wasn’t the only factor that drove production overseas, it was a major one. During these six years, Walmart’s imports from China tripled in value from $9 billion to $27 billion.

Small, family-owned retail businesses likewise closed in droves as Walmart grew. Between 1992 and 2007, the number of independent retailers fell by over 60,000, according to the U.S. Census.

Their demise triggered a cascade of losses elsewhere. As communities lost their local retailers, there was less demand for services like accounting and graphic design, less advertising revenue for local media outlets, and fewer accounts for local banks. As Walmart moved into communities, the volume of money circulating from business to business declined. More dollars flowed into Walmart’s tills and out of the local economy.

In exchange for the many middle-income jobs Walmart eliminated, all we got in return were low-wage jobs for the workers who now toil in its stores. To get by, many Walmart employees have no choice but to rely on food stamps and other public assistance.

Walmart’s history is the story of what has gone wrong in the American economy. Wages have stagnated. The middle class has shrunk. The ranks of the working poor have swelled. Whatever we may have saved shopping at Walmart, we’ve more than paid for it in diminished opportunities and declining income.

And the worse things get, the more alluring Walmart’s siren call of low prices becomes. While the Ford Motor Co. once profited by creating a workforce that could afford to buy its cars, today Walmart profits by ensuring that Americans cannot afford to shop anywhere else. The average family of four now spends over $4,000 a year at Walmart.

Such market concentration is unprecedented in U.S. history, as is the concentration of wealth it has engendered. Sam Walton’s heirs own about half of Walmart’s stock and have a net worth equal to the combined assets of the bottom one-third of Americans — about 100 million people. This year alone, the Waltons will pocket $2.7 billion in dividends from their Walmart holdings.

They are among the few Americans who have reason to celebrate Walmart’s 50th birthday. As for the rest of us, the milestone offers a good moment to reflect on the company’s business model and where it might lead us if we allow Walmart’s growth to continue full-steam for another 50 years.

Stacy Mitchell is a senior researcher at the Institute for Local Self-Reliance and the author of Big-Box Swindle. She lives in Portland, Maine.
Distributed via OtherWords (OtherWords.org)