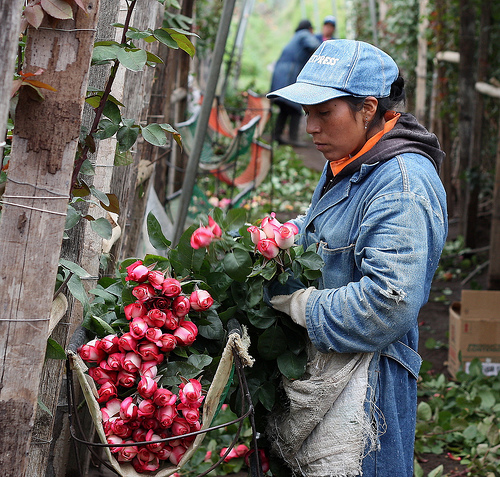 A Better Way to Say I Love You

Most of the roses sold in the United States are grown in Colombia and Ecuador, where they are doused with toxic pesticides.
By Jill Richardson | February 6, 2013

“Why do American companies sell pesticides that are banned in the U.S. to my country?” my Colombian friend Luz asked me. I had no good answer.

Yet, this question lies at the core of the bouquet of roses you might give or receive this Valentine’s Day. Nearly all roses sold in the U.S. are grown in Colombia or Ecuador. U.S. trade policies even encourage them to sell us roses by scrapping import duties, because Washington hopes it will keep them from selling and shipping us cocaine.

A dozen roses, though beautiful and fragrant, above all, are a symbol. “I love you. I care about you. I care so much I spent a lot of money on you,” they say. A simple gift of one dozen roses can cost you $45 or more, especially this time of year.

Americans spend about $2 billion on flowers for Valentine’s Day. That’s a lot of money for a symbolic and transient gift that will last perhaps a week before wilting.

The love of your life might find her bouquet a little less romantic if she knew how they were produced. Colombian and Ecuadorian rose growers douse the flowers with toxic pesticides, and an estimated 20 percent of the pesticides they use are banned in the United States. Sure, a dozen roses would be much less romantic if a bug crawled out of them, but how romantic is it to give something toxic to your beloved? 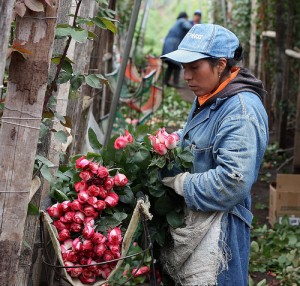 The South American export-oriented flower industry’s workforce is primarily comprised of young women. They work long, hard hours, often with little safety gear to shield them from dangerous chemicals. The land and water devoted to growing the roses South America exports puts pressure on farmers who are growing food for their families or to sell in local markets. The pollution from the rose farms affects local communities as well, since some chemicals seep into the waterways.

Because roses aren’t food, they aren’t tested for pesticide residues when they arrive in the United States. And, as Luz pointed out, many pesticides sold worldwide are produced by U.S. corporations. I suppose you could say Americans benefit on both ends when our corporations make money selling toxic pesticides abroad and we gain the opportunity to buy cheap imported roses.

But these gains come at the expense of the health and well-being of people we’ve never met who live half a world away.

Why not skip the roses this year? How about giving your sweetheart something a little less toxic?

Like roses, a home-cooked meal is a gesture that tells your love how much you care. Can’t cook? Go out for dinner and pick up the tab. Give your significant other a massage. Be creative. What gift will commemorate your relationship with one another in a special way?

If you’re hooked on roses, you can look for organic ones (yes, they exist!) or, better yet, give a potted rose bush that you can plant together and enjoy for years to come.

You don’t eat roses, you don’t use them for anything, and they are gone within a week. There are an awful lot of environmentally harmful things in our lives that are harder to give up than a stereotypical Valentine’s Day bouquet. Cars, for example. Or air conditioning.

Switching from toxic roses to other gifts is a tiny sacrifice that can make a difference.