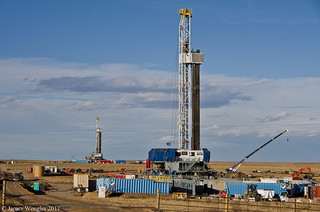 Fracking might be profitable, but whether it's good for anything else is doubtful.
By Jill Richardson | July 10, 2013

Jacki Schilke was suffering from symptoms ranging from rashes, pain, and lightheadedness to dental problems and urinating blood. The formerly healthy, 53-year-old cattle rancher’s body was under assault from a list of toxic chemicals as long as your arm.

But Schilke’s lucky — so far — compared to five of her cows. They died. 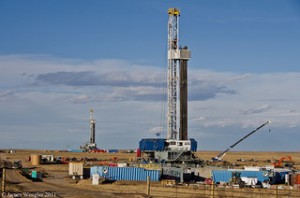 The rancher’s problems might become worse in time, since the chemicals causing her acute problems are also linked to chronic, deadly diseases like cancer.

What’s afflicting Schilke and her cows? The oil and gas drilling craze known as hydraulic fracturing, or fracking. As The Nation magazine and the Great Plains Examiner reported last year, Oasis Petroleum started fracking on land three miles from her ranch in 2010. Oasis got money, the world got more energy from the gas they drilled, and Schilke got sick. Now, she won’t even eat her own beef.

If the results of fracking were virtually unknown a decade ago, before it became a common practice in states like Pennsylvania and Schilke’s home of North Dakota, there’s no mystery remaining now.

And the toxins flow from there into the living things that rely on the water: the soil, the air, plants, animals, and us. We’re fracking our food.

Yet President Barack Obama is a big fracking supporter. He called natural gas a form of “clean energy” in the big address on global warming he delivered in June, touting the nation’s production of more natural gas “than any other country on Earth.” Then he said, “We should strengthen our position as the top natural gas producer because, in the medium term at least, it not only can provide safe, cheap power, but it can also help reduce our carbon emissions.”

Right. Compared to other forms of dirty energy, natural gas might reduce our carbon emissions. But at what cost?

If our only energy options were oil, coal, and natural gas, we’d be in a rotten Catch-22. Luckily, we have more choices than that. There are growing solar, wind, and geothermal options. Perhaps the most overlooked alternative is increasing efficiency.

I visited the University of Utah, in Salt Lake City, two years ago. The school had made a big effort to reduce its energy use. In one building, I saw a hallway that used to have its lights turned on all the time. The builders had never even installed switches to turn them off.

Decades ago, energy was “too cheap to meter.” It seemed cheaper to just leave the lights on all the time than to wire them to be turned off. That’s changed. After some retrofitting, the lights can be turned off.

How many other buildings and homes have no light switches, insufficient insulation, or old, power-guzzling appliances? How many are still being built without taking advantage of the most up-to-date methods that curb energy use?

Obama proudly spoke of doubling America’s use of solar and wind power in the last four years, with plans to double them yet again. He’s right. We increased wind and solar energy from less than 1 percent of our energy in 2007 to less than 2 percent in 2011. (Meanwhile, our reliance on natural gas crept up from 28 percent to 30 percent of total energy consumption, and our total use of energy overall rose in those four years by 9.4 percent — with most of the increase coming from dirty sources.)

Fracking might be profitable, but whether it’s good for anything else is doubtful. Emissions during the fracking process outweigh any benefits of reduced emissions when the fuel obtained is burned. Besides, how does fracking American land make sense if it’s poisoning our food and water supply with chemicals that give us cancer?

Let’s solve our energy problems by increasing efficiency and by turning to truly clean sources of energy: renewable options like solar, wind, and geothermal power.