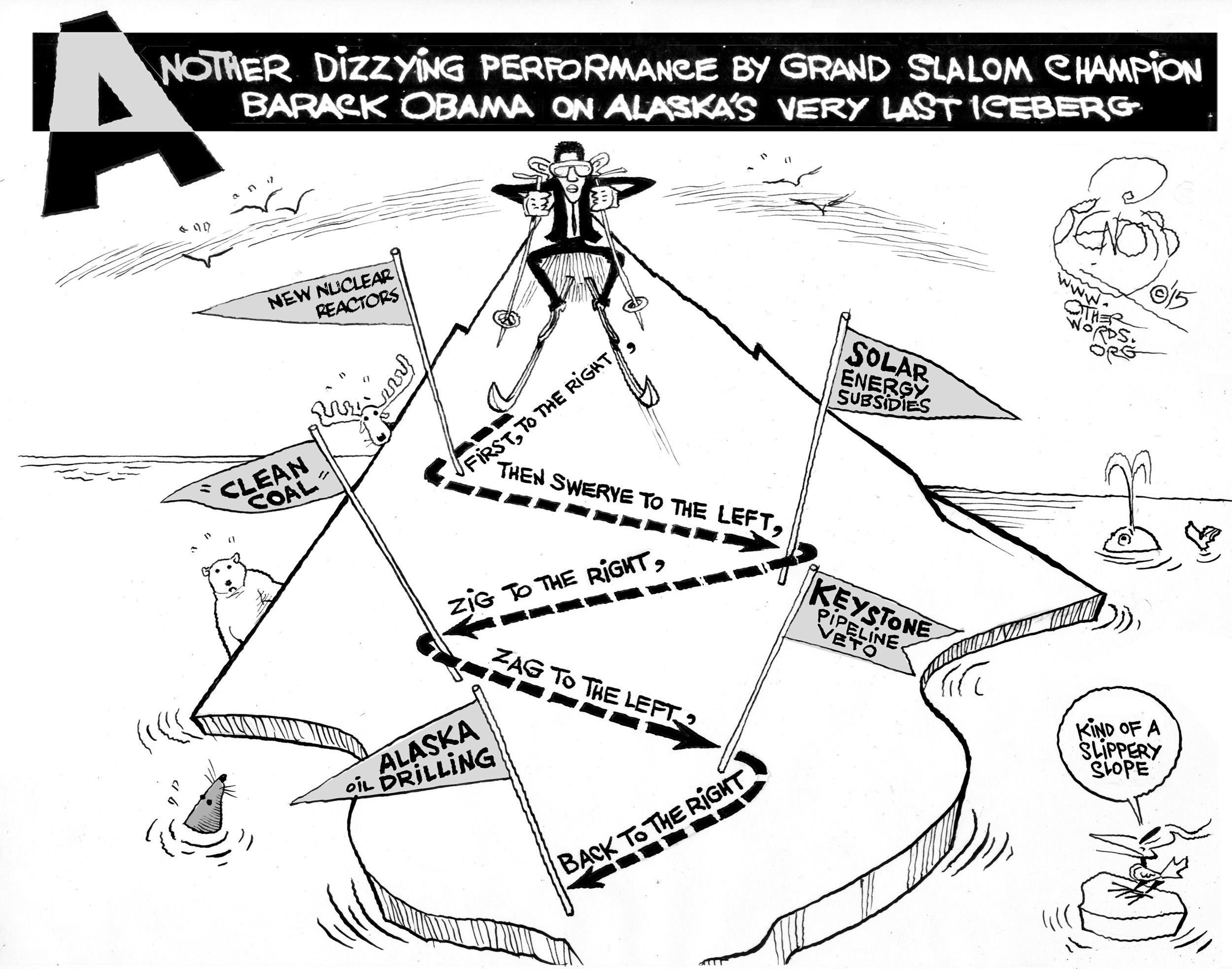 Zigging and Zagging Down a Slippery Slope, an OtherWords cartoon by Khalil Bendib

Coal-burning power plants that capture carbon aren’t worth the expense.
By Emily Schwartz Greco | May 20, 2015

Extracting coal from the ground and disposing of its toxic byproducts makes a dirty mess no matter how it’s burned. But this “clean coal” ruse is conjuring up billions of dollars in government subsidies.

Take the 110-megawatt Boundary Dam plant in Canada’s Saskatchewan province, the world’s first carbon-capture operation. It cost $1.2 billion to get it switched on last year. That’s several times the price tag for a standard coal-fired plant or building a wind farm or utility-scale solar project capable of generating the same amount of energy — enough to power 100,000 homes.

Going with wind or solar would have produced zero emissions without burning any fuel, reducing environmental and monetary costs down the line.

Another carbon-capture boondoggle is slated to open next year on this side of the Canadian border: Southern Co.’s Kemper County plant in Mississippi. It’s an even bigger cautionary tale.

Kemper’s construction costs have tripled to more than $6 billion since crews first broke ground in 2010. The project is more than two years behind schedule and in trouble. The Mississippi Supreme Court ruled in February that the locals were unfairly shouldering cost overruns via higher electric bills.

“The ratepayers’ property (money) is being confiscated through governmental decree, by a rate increase imposed by a privately owned corporation,” the court’s majority declared, ordering Southern to issue refunds. The company has, naturally, requested a new hearing.

Other efforts to build or retrofit existing power plants to use these new systems face similarly grim prospects. 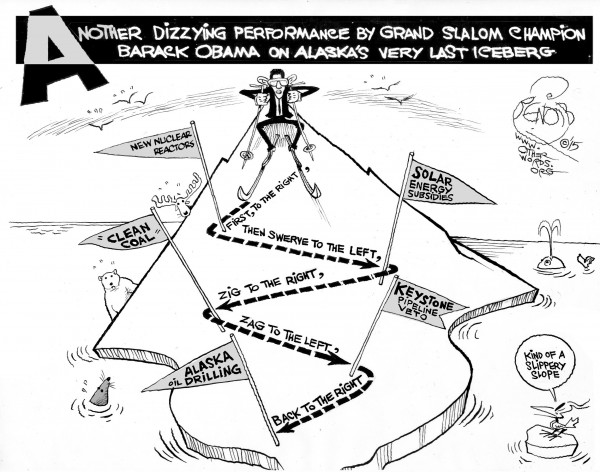 Zigging and Zagging Down a Slippery Slope, an OtherWords cartoon by Khalil Bendib

The Obama administration wisely let a $1 billion commitment to complete the long-delayed FutureGen carbon-capture plant in central Illinois lapse a few months ago. The canceled government money came from 2009 stimulus funds that expire in September.

Still, the federal government has injected $6 billion into carbon-capture coal to date. And President Barack Obama’s proposed 2016 budget calls for wasting another $2 billion in tax credits on this pipe dream.

Lawmakers backed by Big Fossil aren’t giving up on this corporate welfare either. Senators Joe Manchin of West Virginia and Heidi Heitkamp of North Dakota, both Democrats, just introduced bills that would direct the federal government to squander more money on carbon-capture systems.

Burning coal with this new twist will “reduce electricity costs for all of us,” Heitkamp asserted.

Really? She should check out what the Energy Department says: Carbon-capture coal technology jacks up costs by up to 80 percent and can render power plants as much as 30 percent less efficient.

Gasification, another pricey new way to burn coal, is equally futile. Just ask the ratepayers forced to subsidize Duke Energy’s costly experiment with it at the troubled Edwardsport coal plant in Knox County, Indiana. Or check out the predictable cascade of lawsuits over there.

Perhaps the most damning thing about this racket is what happens to the trapped carbon itself. Utilities may sell it to oil companies, which use the stuff to pry lingering barrels of petroleum from tapped-out oil wells.

The Border Dam plant in Saskatchewan is selling carbon sucked out of that pioneering, over-priced, and supposedly “clean” coal-fired power plant to the Cenovus oil company, which uses it to extract a fossil fuel that would otherwise stay in the ground.

This aftermarket defrays some of the money spent sequestering carbon. It also generates emissions that render the process no cleaner than equipping coal-fired power plants with modern filters, scrubbers, and other gizmos.

Burning the dregs from spent oil wells releases yet more carbon into the atmosphere, stoking climate change. If that doesn’t bother you, maybe pondering the possibility that injecting the carbon dioxide deep underground may trigger earthquakes will.