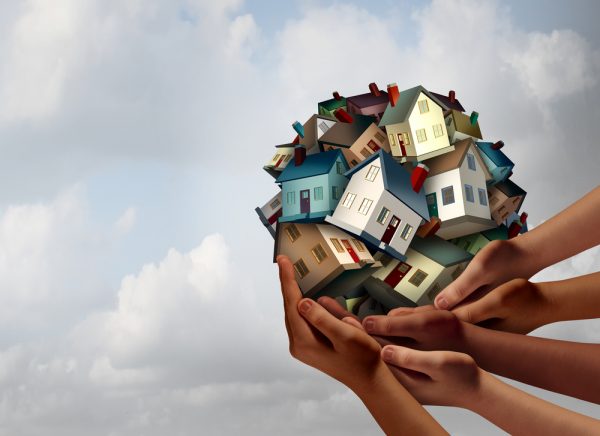 A Future for Homeownership

How community-controlled land and housing could save the American dream.
By Jarrid Green | May 30, 2018

At this point, it’s no secret that America has an affordable housing problem. Home ownership, long the staple of the “American Dream,” is increasingly a privilege enjoyed only by the wealthier and whiter.

For many young people, the opportunity their parents had to build stable wealth through home ownership seems like a cruel joke in today’s economy. There’s even a viral tweet: “Millennials. Walking around like they rent the place.”

But the housing situation in the U.S. is no laughing matter.

According to the Pew Research Center, America has more renters than now than at any point in the last 50 years. A generational shift in lifestyle choices? Unlikely. A 2016 survey of renters found that 72 percent would like to own a home, but many were holding off for financial reasons.

For many millennials, the choice between a job and an opportunity to own home is a stark one. As manufacturing and farming communities have declined, job opportunities are concentrating in cities like San Francisco and New York, hubs for the knowledge economy where homeownership is far out of reach for ordinary Americans.

For young people of color, the situation is even worse. Decades of racial disparities in housing policy and markets locked their families out of the wealth building opportunities enjoyed by the parents and grandparents of many white people. Those impacts are still felt today.

According to the U.S. Census Bureau, 72 percent of whites own their homes, compared to 57 percent for Asians, Native Hawaiians, and Pacific Islanders, 48 percent for Hispanics, and 42 percent for blacks.

And even when homeownership was attainable, these owners of color built wealth slower than their white counterparts. A recent Zillow study found that 80 years after the federal government used racial redlining to determine “good” and “bad” neighborhoods for mortgage lending, the impacts of this discrimination are still being felt in depleted home values for many black owners.

Simply put, the American housing system may not be sustainable — either morally or economically. Fixing this system and getting the American dream back on track means rethinking how home ownership works, and who has access to it.

One idea? Community-controlled land and housing, like land trusts and housing co-operatives. The idea is to create opportunities for people often excluded from the ownership economy, while also keeping a community’s long-term interests in mind.

For instance, a community land trust works by entrusting ownership of a piece of land to a nonprofit dedicated to permanent affordability. That nonprofit can then sell homes on this land at below-market prices — with the provision that the new owners are obligated to pass this affordability on to the next buyer when they sell.

Locking in affordability like this means that economic revitalization doesn’t need to be accompanied by the kind of skyrocketing prices making homes so unaffordable in cities like San Francisco or Boston. And it means that there’s always an affordable first rung on the ladder of homeownership for future generations.

Even in cities where homes aren’t expensive now, this can protect affordability for the future.

These are strategies with decades of on-the-ground testing behind them, and they’re ready to be scaled up. For example, Proud Ground, a Portland-based nonprofit community land trust, has served more than 300 families since the early 1990s.

There are an estimated 225 active community land trusts across the country with a similar structure as Proud Ground. Many of these are small, and some are just getting off the ground. But with proper support, they can spread and grow to be a key part of the affordable homeownership solution America needs.

Jarrid Green is a Senior Research Associate at the Democracy Collaborative. Distributed by OtherWords.org.