The president's newest advisers share his impetuous temperament and preference for bombs over diplomacy.
By Jill Richardson | March 28, 2018

I don’t have anything more savvy, or cool, or nuanced to say. I’m just scared.

Since November 8, 2016, I’ve felt varying degrees of distress ranging from unease to panic. But whatever Donald Trump has done while in office — however much he’s taunted Kim Jong Un by calling him Little Rocket Man and threatening to bomb North Korea — at least he had a team around him that seemed a bit cooler headed and diplomatic.

Gone are those days.

Lately I am dealing with it by turning off the news. But not knowing what’s going on won’t keep any of us safer from it.

Ousted secretary of state Rex Tillerson at least used to assure North Korean leader Kim Jong Un that we weren’t trying to to overthrow him.

Tillerson was for the Iran nuclear deal, which Trump doesn’t like — but it’s a good deal. The longer Iran has no nukes, the better for all parties concerned.

Now Tillerson is out, and CIA director Mike Pompeo has been picked to replace him. Like Trump, Pompeo hates the Iran deal. Pompeo is more hawkish on North Korea, too. 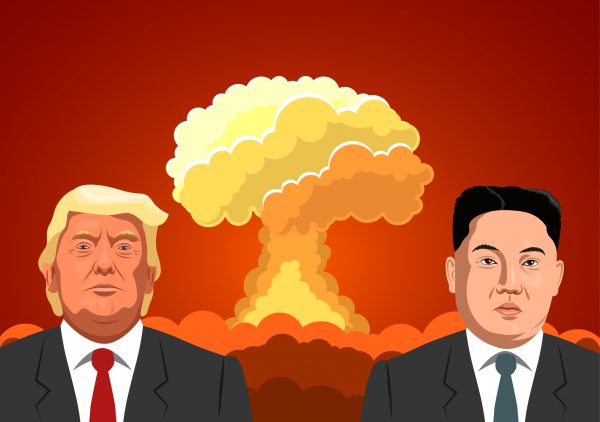 John Bolton has replaced H.R. McMaster as Trump’s National Security Adviser. Bolton is a hawk on pretty much everything and he seems to have no use for diplomacy.

Remember, diplomacy is a nice word for “getting your way without killing anybody.” We want America to advance its own interests. I think most of us would prefer to prevent any loss of human lives, including U.S. soldiers, in the process.

When George W. Bush nominated Bolton to be his ambassador to the United Nations, a horrifying story about Bolton came to light. I’ve personally met the women this happened to, Melody Townsel, and I’ve known her for over a decade.

In 1994, Townsel was working for a U.S. government subcontractor owned by Trump allies Roger Stone and Paul Manafort overseas in Central Asia.

She raised concerns about the prime contractor, then Bolton’s employer, whose ineptness was jeopardizing the project. Remember, this was a government project, paid for by and supposedly in the interest of U.S. citizens.

Instead of addressing her concerns, Townsel wrote in a letter to the U.S. Senate, “John Bolton put me through hell — and he did everything he could to intimidate, malign, and threaten not just me, but anybody unwilling to go along with his version of events. His behavior…wasn’t just unforgivable, it was pathological.”

Eventually, even the Republican-led Senate refused to confirm Bolton’s UN nomination. Bush was only able to get Bolton into the job using a “recess appointment” — waiting until the Senate went on break and then slipping him in.

In an administration led by a man with an unpredictable, impetuous temperament who seems to prefer bombs to diplomacy, we’ve just lost two stabilizing forces and replaced them with two who will hesitate far less before advocating war. They seem far less likely than their predecessors to calming down dictators like Kim Jong Un who already enjoy threatening the U.S. with nuclear annihilation.

This isn’t a game. Real lives are at stake. And with no one to counsel caution, one wrong tweet could tip the balance.