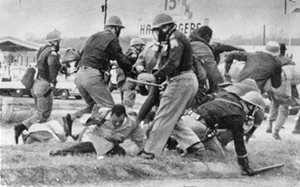 A Global Spotlight on Voter Suppression

Just before his death this past Thanksgiving, my friend Lawrence Guyot whispered one last assignment: We must “internationalize” the struggle over the right to vote.

Decades ago, our movement to end segregation and extend the full rights of citizenship to all had been an inspiration to those struggling for human rights around the world. Now, Guyot told me, those standing up for justice in other countries need to shine a global spotlight — a spotlight of shame — on renewed efforts to disenfranchise voters of color in America.

In the early 1960s, while others were concentrating on integrating bus transportation and lunch counters, Guyot was a leader and strategist of a student movement focused on challenging state-sanctioned segregation by registering Blacks to vote. The Klan, White Citizen Councils, and every apparatus of the local power structures fought back against the civil rights movement.

Activists, like Guyot, who led the struggle for the right to vote were jailed, beaten, and “‘buked and scorned,” as the civil rights anthem tells the story.

Thousands of African Americans trekked to the courthouses to take Mississippi’s literacy test and register to vote. Yet, regardless of their years of schooling, the local white registers came up with excuses to fail nearly all of them.

Then, in 1964, Guyot organized and chaired the multiracial Mississippi Freedom Democratic Party (MFDP) to challenge the seating of the all-white Mississippi delegation to the Democratic National Convention held in Atlantic City that year.

Fearful of losing the Southern white vote, national party leaders offered to seat only a token two MFDP leaders, a compromise they rejected. “We didn’t come all this way for no two seats,” Fannie Lou Hamer said, “’cause all of us is tired” — tired of injustice. But as a direct result of Guyot’s efforts, 1964 was the last year Mississippi sent an all-white delegation to a Democratic National Convention.

In 1965, Congress passed the Voting Rights Act, giving the federal government tools to finally enforce the voting rights that had been given to former slaves with the ratification of the 15th Amendment in 1868.

That should have been the end of the story.

Sadly, bold and heinous schemes to limit the right to vote keep appearing in state legislatures.

In 2006, Congress debated renewing the Voting Rights Act for more than 10 months, holding 21 hearings and reviewing 15,000 pages of evidence. The Senate voted 98-0 and the House voted 390-33 to renew the law for another 25 years. The near-unanimity on the issue, in a time of fierce partisanship, confirmed there was no serious question about the continuing need for the federal government to defend the right to vote.

But now, Shelby County, Alabama, has brought a new challenge to the Supreme Court. It’s counting on conservative justices to turn back the clock to the bad old days.

That’s why Archbishop Desmond Tutu from South Africa and human rights luminaries from 22 countries on five continents responded to Lawrence Guyot’s plea. They have sent an open letter imploring the Supreme Court to reject Alabama’s effort to weaken the mechanism that forbids discrimination.

These advocates state that they are in solidarity with those in our country who continue to fight “to prevent racist ingenuity from devising new obstacles” to minority voting. But Archbishop Tutu and the other signatories offer the justices their own concerns as well.

Their letter begins, “America’s leadership in voting rights has been a beacon of hope for millions around the world who have made their own sacrifices for freedom and democracy.” They close with this caution: “Beyond your borders, the global march toward justice will suffer grievous harm should you surrender to those who seek to disenfranchise American citizens.”

To Lawrence Guyot and all the martyrs, known and unknown, who shed their blood for the right to vote here in the United States of America, Rest In Peace.