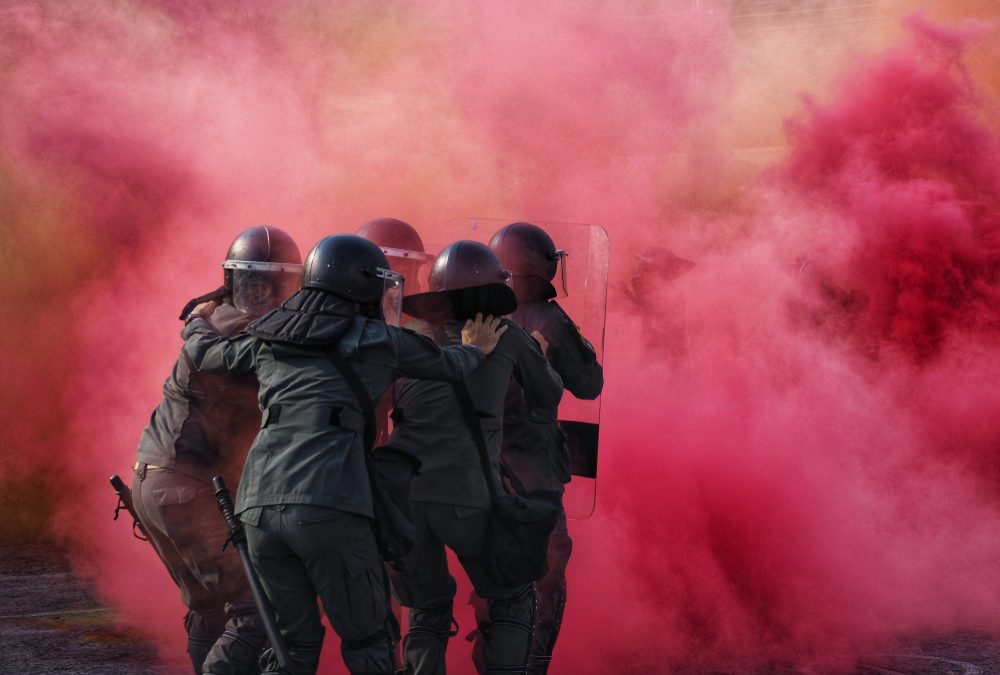 A Matter of Life and Breath

Following the police killing of George Floyd, we are witnessing the largest nationwide uprising in five decades. Unfortunately, these largely nonviolent protests against racism and police brutality have been met by militarized police forces who deploy tear gas, among other weaponry, at demonstrators.

Firing tear gas canisters is already widely considered an excessive use of force. But it is especially lethal during COVID-19.

I have participated in dozens of demonstrations. But I’ve never seen tear gas deployed as readily and liberally as it was during some recent events in Portland, Oregon. As a National Lawyers Guild Legal Observer, I documented footage of police attacking at least six demonstrations in the city.

In the first, on Sunday May 1, thousands of demonstrators marched through the streets before arriving at the Multnomah County Justice Center. Within the hour, the Portland Police Bureau (PPB) had already deployed multiple rounds of chemical tear gases.

Even after the crowds had dispersed, I witnessed the PPB stalk a group of black youth who were walking home. An officer from inside the vehicle threw an additional tear gas canister at the kids and drove away, leaving the kids coughing and spitting out the chemicals.

A few days later, on Tuesday June 2, thousands more poured into the streets before arriving at Portland’s Pioneer Courthouse Square. Again, the PPB immediately and recklessly began deploying tear gas. Police also gassed demonstrators that Thursday, Friday, Saturday, and Sunday evenings, even after multiple calls by city commissioners to halt the use of tear gas.

Tear gas bombs and sprays irritate the mucous membranes of the eyes, nose, and lungs. This causes coughing, wheezing, and can even lead to respiratory arrest. A new study also found that 80 percent of respondents who were tear gassed reported a lasting cough.

This is a particularly appalling weapon to be deployed during COVID-19, a virus that attacks lung cells, destroys lung tissue, cuts off oxygen, and leads to respiratory failure and septic shock.

According to Dr. Yoko Furuya, an infectious disease specialist at Columbia University, people with vulnerable airways and lungs are more likely to be victims of the serious, deadly COVID-19 consequences. Additionally, deploying chemicals into a crowd, causing them to cough out the irritants and release airborne particulate matter, drastically increases the likelihood that the virus will spread.

Clearly, the police’s use of tear gas has both immediate and delayed violent effects on demonstrators.

Black people are already three times more likely to die of COVID-19 than white people, due to a wide variety of systemic racist policies and standards. Even George Floyd’s autopsy report showed that he tested positive.

Because of this pre-existing link between racism and public health, an open letter by infectious disease experts at the University of Washington made a case for viewing the anti-racism protests “not primarily as something that could add to cases of coronavirus (though they might) but as a tool to promote public health in and of themselves.”

Across the country, reckless and aggressive use of tear gas on anti-racist protestors during a respiratory pandemic is likely intentional. And it’s deadly. In Columbus, Ohio, Jessica Grossman — a 22-year-old recent graduate of Ohio State — died after being tear gassed and pepper sprayed by police.

In Portland, commissioners have called for a ban on tear gas. The city should act on that call immediately, and others across the country should follow. It’s a matter of life and death.

Black people cannot breathe in this country, and police have been ruthless in ensuring it stays that way. Let’s not let that happen.

Josie Moberg is a Summer Law Clerk for the Center for Sustainable Economy. She’s in her second year at Lewis and Clark Law School. This op-ed was distributed by OtherWords.org.