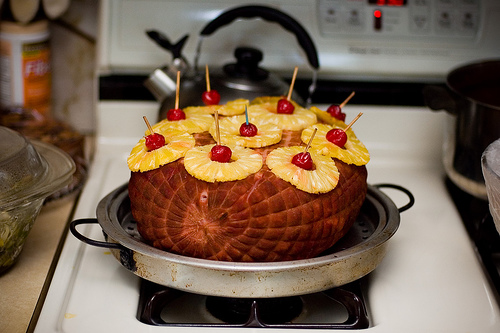 Some of the ingredients on your Christmas dinner table aren't so sweet.
By Jill Richardson | December 19, 2012

“What are your Christmas traditions?” I asked the family I was staying with in Kenya earlier this year while doing some research. I wondered whether Kenyans decorated Christmas trees or awaited Santa Claus like American children do. My host’s response surprised me. “For Christmas, you must slaughter a goat.”

Slaughter a goat? I imagined how well that would fly at the Christmas gatherings I attend in the United States. Meat plays a central role in American Christmas dinners, when we consume a quarter of the ham we eat all year. But, unlike those Kenyans who got up close and personal with their holiday meal, Americans are mostly ignorant about where that meat came from. And many wish to stay that way.

While I would not enjoy watching my dinner get slaughtered — particularly not if it were part of a Christmas celebration — I would like to know what I’m eating. To meet my meat, so to speak. 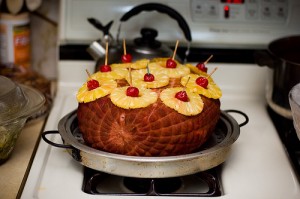 Isn’t it odd that a product called HoneyBaked Ham contains no honey? If one were to cure a ham at home, the simplest recipes call for nothing more than salt, brown sugar, and water. As for the long list of chemicals, the only one that commonly appears in ham curing recipes is sodium nitrate, which can prevent botulism. Unfortunately, sodium nitrate may also increase your risk of heart disease and diabetes, according to the Mayo Clinic.

Then there are the ingredients that don’t appear on the label. Before it was slaughtered and processed, the ham was an entire pig. Prior to slaughter, the pig was most likely fed ractopamine, a controversial drug. It makes the pig grow faster and keeps it lean — but due to human health concerns it’s banned in many countries, including the entire European Union, Taiwan, and China.

Human health concerns over a drug for pigs, you might ask? Yes, because trace ractopamine levels are found in almost one in five pork samples, according to Consumers Union, and ractopamine increases anxiety in humans. Since the drug is given to between 60 and 80 percent of U.S. pigs, it is stoking trade woes and making it hard to export our pork.

(By the way, Consumers Union, the group that publishes Consumer Reports, also found that 69 percent of raw pork chop and ground pork samples were contaminated with a pathogen that causes food poisoning. And most of the pathogens found were resistant to antibiotics. Yum.)

If these stomach-churning details are what Americans find when they learn about the source of their meat, is it any wonder they prefer to eat in the dark? Well, at least in this case, there’s some good news.

As it turns out, some farmers produce pork as humanely, safely, and healthfully as the farmer who raised Wilbur in Charlotte’s Web — without the talking spider, of course. And some artisanal small businesses cure it into ham using only ingredients you can pronounce.

Often, meat from animals raised on pasture by local farmers costs much more than “factory farmed” meat. But not in this case. HoneyBaked Ham charges a pretty penny for its chemical-laden spiral-sliced products. For the same cost, you could get a very nice cut of meat from a local farmer.

When you start out with a great cut of meat, you don’t need so many chemicals to make it taste good. Odds are it will taste better than a chemical creation from the store.

And if you buy local, you won’t have to slaughter your Christmas dinner yourself like my Kenyan friends just to know where it came from.