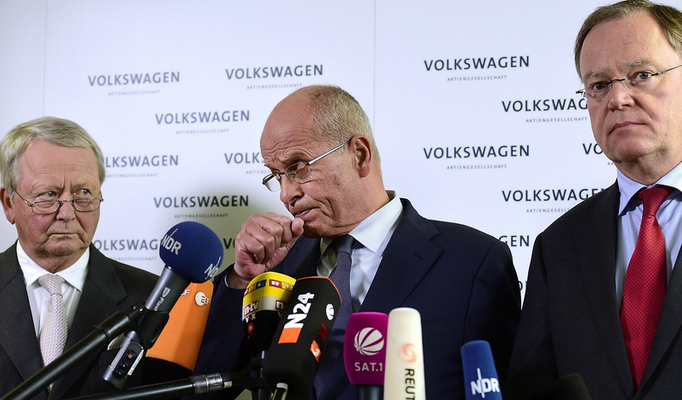 A Perfect Portrait of Corporate Crime

Here’s what it looks like when you’re caught betraying consumers and poisoning the air.
By Jim Hightower | October 7, 2015

If a picture is worth 1,000 words, here’s one worth a thousand times that.

It’s a shot of three Volkswagen board members, gathered for a press conference to announce the resignation of Martin Winterkorn. VW’s disgraced CEO was forced out after the auto giant was busted for rigging its supposedly eco-friendly diesel cars with secret software. That dirty tricky let the vehicles spew up to 40 times more toxic pollutants into the air than allowed by law.

In the picture, the lead-faced VW spokesman looked like he was gagging, as though he’d just swallowed a live toad. One grim-looking fellow board member was glaring in ill-disguised disgust, while the other nervously looked straight into the camera, as if pleading: “Please tell me this isn’t happening, and please, please keep me out of the picture.” 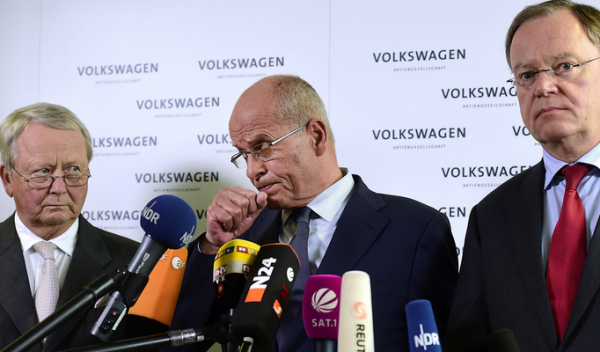 It’s a perfect portrait of a shameful corporate crime, with these highly paid overseers essentially confessing that businesses don’t commit crimes — their executives do.

Yet the three board members still played the corporate game, referring to Volkswagen’s deliberate deception of millions of car buyers as “irregularities” and suggesting that some mysterious villains had installed the malicious software without the top bosses knowing it.

Horsefeathers. Eleven million VWs and Audis were tampered with in the past six years. Either these “overseers” knew what was going on, or they’ve been derelict in their sworn duty to prevent corporate abuse.

Volkswagen has long been known for strict, top-down decision making, with even minor matters requiring the OK of its governing officials. The company’s premeditated, systemic betrayal of consumer trust — not to mention its flagrantly illegal poisoning of our air for six years — is hardly a minor matter.

No wonder the photogenic blame-dodgers looked like deer caught in a VW’s headlights.