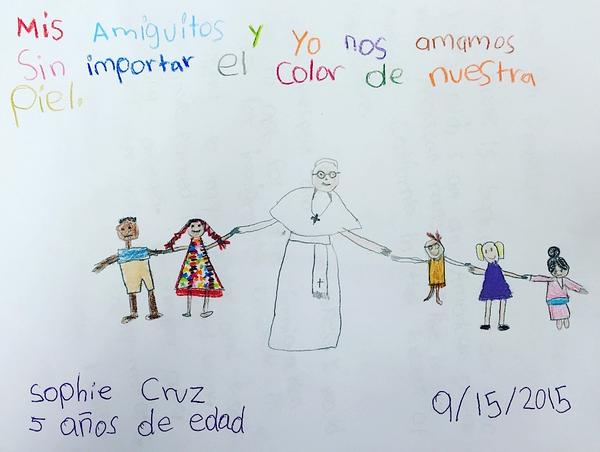 A Pilgrimage for Love, Justice, and Dignity

One hundred women walked 100 miles to celebrate the pope’s message on migration.
By Cecilia Velasco | September 30, 2015

One hundred women walked 100 miles to welcome Pope Francis to Washington. Their goal? To bring attention to the U.S. immigration crisis — and to touch the hearts of our nation’s leaders.

They started their pilgrimage outside the immigration detention facility in York, Pennsylvania. They walked for eight days, sharing their stories of struggle, discrimination, deportation, and family separation. They pushed through pain and blisters to reclaim their humanity and inspire love and compassion for migrants everywhere.

I caught up with them on day five in Baltimore and again at the closing vigil in Washington, DC. I expected to see tired faces and dragging feet, but instead I was greeted with cheers, singing, tears of joy, and an overwhelming sense of hope and determination. “Are you all tired?” they chanted. “What’s that?”

These courageous women are unstoppable. 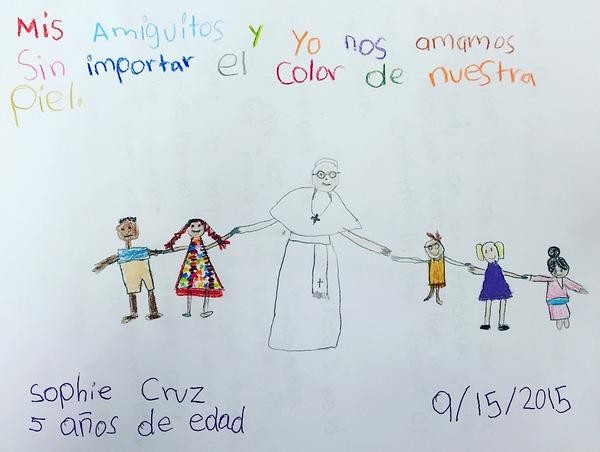 They weren’t acting alone. Also on a mission to put a human face on the immigration conversation was 5-year-old Sophie Cruz, who came all the way from Los Angeles.

This determined little girl in a beautiful Mexican indigenous dress caught the pope’s attention. Francis embraced her as she gave him a t-shirt and a letter.

“I want to tell you that my heart is sad,” she wrote. Reflecting on her worries about her undocumented parents, she told the pontiff, “every day I am scared that one day [the authorities] will take them away from me.”

Sophie represents the 4.5 million citizen children who experience this fear and uncertainty every day, something that no kid should ever have to endure. She asked Francis not to forget about children caught in the middle of our broken immigration system, and begged him to urge President Barack Obama and Congress to pass immigration reform.

As I watched Francis address Congress, I smiled and thought of Sophie, the 100 women, and our nation’s immigrant families. We all rejoiced upon hearing the pope’s words of compassion toward immigrants. He called on our lawmakers to “view them as persons” while “seeing their faces and listening to their stories.”

The pontiff’s words couldn’t have come at a better time.

Anti-immigrant rhetoric is growing. Politicians are competing with one another to see who can say the most outrageous, hateful, and racist words about immigrants. Their comments have even inspired violence — such as when two men brutally assaulted a Latino man in Boston, telling police, “Donald Trump was right, all these illegals need to be deported.”

Pope Francis implored Congress to remember that this country was founded by immigrants, and urged them to follow the Golden Rule.

The pope continued his U.S. visit with stops in New York City and Philadelphia, where he continued spreading messages of love and respect for thy neighbor.

In one of his last public events in Philadelphia, he spoke with great affection to a crowd filled with recent immigrants at Independence Hall, a place known to many as America’s birthplace.

“Do not be discouraged by whatever challenges and hardships you face,” he advised them. He asked them “not to forget that, like those who came here before you, you bring many gifts to your new nation.

They’ll walk on the 11th day of every month in prayer, love, and unity with this nation’s more than 11 million undocumented immigrants. How many more miles will it take until Congress starts treating immigrants with the respect they deserve?

Cecilia Velasco is the New Mexico Fellow at the Institute for Policy Studies. IPS-dc.org
Distributed by OtherWords.org.