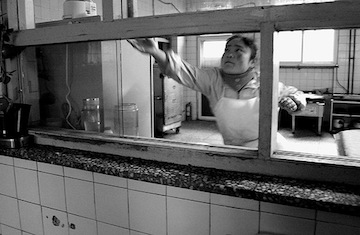 A Plateful of Justice

The people who wash your dishes and the folks who cook and serve your food deserve better.
By Javier Rojo | March 27, 2013

When my father immigrated to the United States from Mexico in the mid-1980s, his first job was washing dishes at a Furr’s Fresh Buffet restaurant in New Mexico. It paid the state-mandated minimum wage of $2.90 per hour.

My father sent a portion of his scant earnings back to his parents and younger siblings in Mexico. Whatever money he had left, he used to make ends meet. Every day was a struggle.

My father shared a small studio apartment with six other friends. They slept on the floor in sleeping bags. They ate cheap food — beans, rice, and assorted canned goods. My father never ate at the restaurant where he worked. Even with the employee discount, he couldn’t afford the very food he was scrubbing from the dishes.

Furr’s didn’t offer sick leave, so he and his coworkers often washed dishes and cooked food while ill. They couldn’t afford to miss a day.

My father told me the story of one of his fellow dishwashers who worked a week straight, sick with a stubborn cold. At the end of one shift, my father found his coworker slumped over the sink, too weak to move. My father drove him to the emergency room, where the doctors discovered the man had pneumonia. If he’d only stayed home for a few days and rested, the doctors told the dishwasher, he might not have gotten so sick. This, my father and his co-worker knew, was easier said than done.

By the time my dad married my mom, he’d quit his job and found a new profession. No matter how hard he worked, he knew it would be impossible to raise a family on a dishwasher’s salary.

The plight of restaurant workers hasn’t gotten any better over the past three decades. According to the study, Behind the Kitchen Door: A Multi-Site Study of the Restaurant Industry, only somewhere between 9 to 22 percent of restaurant workers earn a living wage, and 88 percent nationwide don’t get paid sick leave. Moreover, seven of the ten worst-paying jobs in the United States are in the restaurant industry.

These grim statistics illustrate why Restaurant Opportunities Centers United, the only national organization in the United States dedicated exclusively to the needs of restaurant workers, is fighting to improve wages and working conditions. At the national level, this group is pushing for an increase in the federal minimum wage as well as a raise in the tipped minimum wage — which has languished at $2.13 for the past 22 years.

Rep. George Miller and Sen. Tom Harkin have introduced a bill to raise the minimum wage to $10.10 an hour and peg the minimum wage for tipped restaurant workers at 70 percent of that. Paid sick leave for all restaurant workers should be another cornerstone of this legislative effort to guarantee more reasonable working conditions for the millions of Americans in the industry.

These are common-sense measures that benefit both the restaurant industry and its workers. Healthier and better-paid employees are usually happier. Happier workers are more productive.

More importantly, making sure restaurant workers earn a living wage and have paid sick leave is the right thing to do. No one should have to decide between taking care of their health and getting paid. One of the most cherished ideals in this country is the notion that if you work hard and play by the rules, you should be able make a decent living and adequately care for your family.

The people who wash your dishes and the folks who cook and serve your food deserve better.

Javier Rojo is the New Mexico Fellow at the Washington-based Institute for Policy Studies. IPS-dc.org
Distributed via OtherWords. OtherWords.org