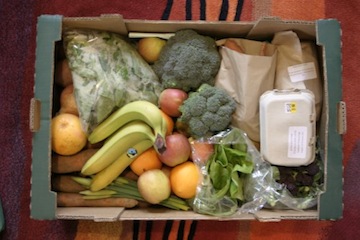 A Recipe for a Sounder Diet

Healthy food is expensive and telling people to eat organic, local food is elitist. Have you heard that argument before?

It’s true. Healthy, organic, local food is expensive. Calorie for calorie, you get more for your money at a fast food drive-thru than at a farmer’s market. And the fast food will be cooked and ready to eat, whereas you might need to take your fresh, organic produce home to cook it.

Now, you might say, that’s only a short-term calculation. Today, a $5 burger, fries, and large soda looks like a better deal than a few ounces of spinach, a handful of dried beans, and a bunch of carrots for the same price. But that overlooks the health consequences of either meal. One of these meals, if eaten regularly, will land you in the hospital someday. The other won’t.

Factor the costs of medical care needed to treat diet-related chronic illnesses like heart disease and diabetes into the equation, not to mention the quality of life problems. Can you put a price tag on a year of your life? How about endless hospital visits? Suddenly, the spinach, beans, and carrots look like a better deal.

Yet, this kind of logic assumes that you have enough money right now to make either choice. And millions of Americans don’t. How many families struggling to raise their children and pay their bills simply lack the cash needed to buy healthy foods or the time needed to prepare them?

So what’s the answer? How do we give more Americans the ability to choose healthy foods? Some say we ought to make them more affordable. I disagree. We need to pay Americans a living wage.

Working hard for 40 hours a week should guarantee a living wage. Who does it benefit if Americans lack the time, money, and resources to feed their families healthy food?

Economically, we’ll all fare better if our fellow citizens are able to work and their children are able to concentrate in school. Poor diets and the health problems that they cause lead to increased absenteeism and a weaker performance. That is, when one does show up to work or school.

For argument’s sake, let’s examine the alternative: cheaper food. We’ve already got the cheapest food in the world. We spend a mere 9.4 percent of disposable income on food — less than people in any other country in the world.

How does one decrease the price of food? Subsidies are one way. Increasing efficiency is another. But in the United States, we also produce an awful lot of cheap junk and call it “food.” If you grab a box of anything off the supermarket shelves, it’s likely full of the same ingredients: corn, soy, wheat, sugar, and stuff to make it taste better, look appealing, last longer, and appear more nutritious. But it’s not nutritious. This cheap food is the stuff that’s making us sick.

Another way to lower the cost of food comes at the expense of the people who grow and harvest our food. Journalist Tracie McMillan worked in the fields of California, where she documented systematic wage theft from farmworkers. The fruits and vegetables the farmworkers pick are healthy, but exploiting the people who plant and harvest our food to lower prices for consumers isn’t the answer.