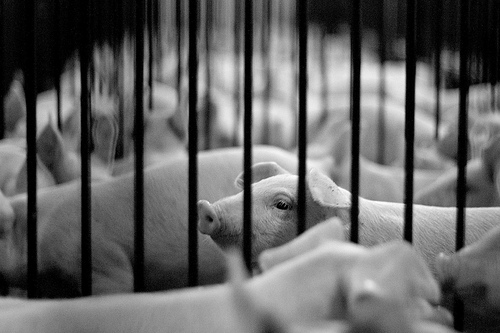 If a Chinese company's bid to acquire Smithfield goes through, consumers and farmers will suffer.
By Wenonah Hauter | June 5, 2013

American consumers may not even notice the change if a newly proposed takeover by China’s largest meat processor of our nation’s leading pork company goes through. But the $4.7 billion transaction would certainly show up on our plates: in the form of farmer exploitation, more factory farms, and a more complicated supply chain that increases the risk of food contamination.

We should all be leery of deals like Shuanghui International Holdings Ltd.’s proposed purchase of Smithfield Foods Inc. They further consolidate our food system, which is already dominated by a mere handful of Big Ag players. And when these cross-border corporate takeovers involve companies with a history of food safety problems and countries with abysmal track records for food and worker safety, our government should refuse to let them go forward. 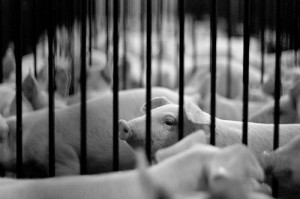 Putting profits above people is a cross-cultural problem. Smithfield owns more hogs than the next eight largest U.S. hog producers combined. It slaughters more hogs than any other company in the world and the company has a growing stranglehold over U.S. farmers, who have fewer options for selling their hogs at the market and are prey to abusive contractors from processors like Smithfield.

In fact, Shuanghui, which is partially owned by Goldman Sachs, grew into China’s biggest meat company by adopting the industrialized factory farm model that American companies like Smithfield pioneered.

The meat industry’s merger mania in recent decades has produced more U.S. factory farms. Nearly all of our hogs are now raised in operations that cram more than 2,000 animals into tight quarters. We may export much of this pork, but we keep all those millions of gallons of manure right here at home, often in hog-heavy North Carolina and Iowa.

This deal is also bad for consumers. In the long term, Shuanghui may decide to offshore hog operations to China. If that happens, the United States could wind up importing the pork it once produced.

The Obama administration is pushing new trade deals with Europe and Pacific Rim partners, which China has also expressed interest in joining. These deals promote transnational megamergers like the Smithfield purchase as much as they promote exports. And behind closed doors, negotiators weaken food safety and environmental standards.

Consumers also suffer from this consolidation of our food system, as the massive egg recall of 2010 — that involved half a billion eggs from Iowa factory farms — demonstrated. With just a few players producing most of what we eat, food safety problems on even a few factory farms can end up in kitchens across the globe.

In 2011, Shuanghui was embroiled in a food safety scandal for producing and selling pork laced with the banned veterinary drug clenbuterol, which is linked to serious human health risks. Foreign ownership can only complicate and shield potential future food safety problems from U.S. oversight.

These deals just benefit executives and bankers — not the rest of us.