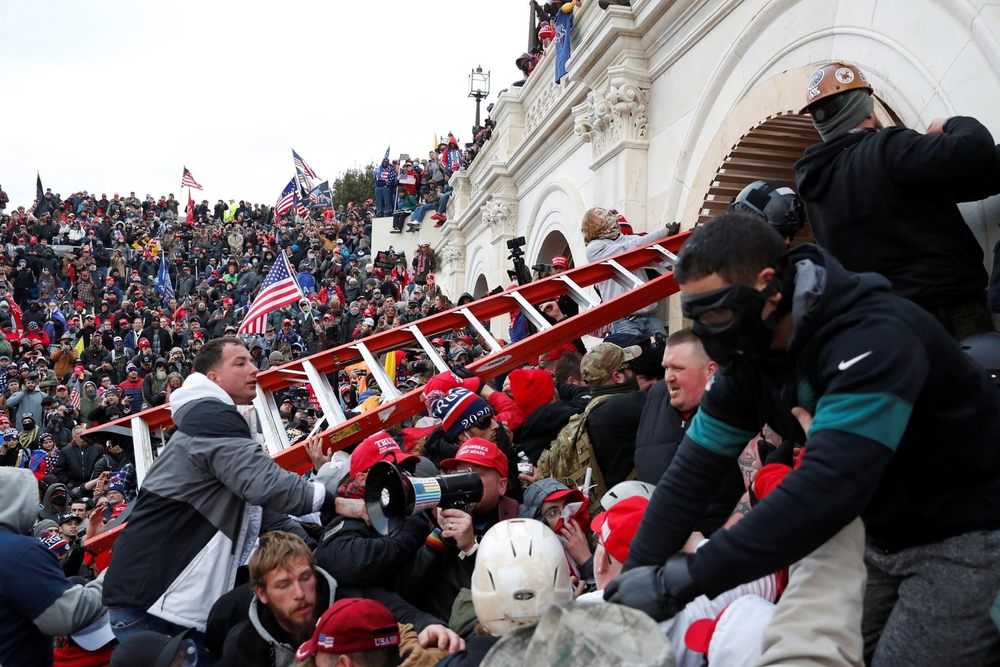 A Tale of Two Mobs

How the GOP abandoned democracy and became an accomplice to insurrection, and what must be done now.
By Mitchell Zimmerman | January 12, 2021

In 1923, Hitler and the Nazis stormed a beer hall in Munich, Germany, from whence they planned to overthrow German democracy. The putsch failed ignominiously, and Hitler was briefly jailed.

That, of course, was not the end of Adolf Hitler. America needs to remember that history if we want to preserve our democracy from the right-wing forces rallied by Donald Trump today.

As Congress gathered to formalize Trump’s election defeat, he and his extremist followers launched their own beer hall putsch. “We will not take it anymore,” Trump told them. “You’ll never take back our country with weakness, you have to show strength.”

With these words, Trump unleashed the frenzied horde.

They breached the barriers around the Capitol and fought their way in, brutally killing a police officer and assaulting many others. They broke into offices, smashed windows, looted, and forced Congress to cease its operations. Outside, they built a gallows.

Many rioters carried weapons and some had plastic handcuffs. Their obvious goal: to take hostages and force Congress to award Trump a second term.

Trump is responsible, but not him alone. The mob he sent had accomplices: a second mob of Republican officials who laid the groundwork by enabling Trump’s lies.

The second mob includes the eight Republican senators and 139 House Republicans who voted against certifying Joe Biden’s election, as well as the 17 Republican attorneys general who supported a bogus lawsuit to throw out the election.

Finally, it includes the Republican office holders who refused to tell their voters the truth: Trump lost. There was no “steal,” as 60 court rulings — including many by Trump-appointed judges — unanimously concluded.

These Republican politicians knew this, but they still insisted Trump be installed as president, confirming their opposition to elections and hostility to constitutional democracy.

The second mob misled Republican voters so well that 45 percent of them actually supported the criminal attack on the Capitol. Those tens of millions of people represent a potential mass base for fascism.

So, what should we do?

First, Trump should be impeached, convicted, and charged with inciting a riot and other crimes. Criminal charges are obviously in order for the terrorist violence committed by the first mob. Experts also suggest expelling members of the second mob from Congress or boycotting them from public life.

Accountability is vital. But the Democrats who now control Congress and the White House must also double down on efforts to restore and strengthen American democracy.

They should act swiftly to limit the power of money in politics, restore the Voting Rights Act, and eliminate needless obstacles to voting. And Washington, D.C. should be admitted as a state, so its citizens have full voting rights and powers.

Finally, the Democratic Party must fight to enact bold programs to deal with the massive problems Americans face — from climate change to the pandemic to the declining living standards of working Americans.

Half-hearted steps will only leave ordinary Americans feeling that that government does not work, priming the pump for more right-wing radicalization. But a full-throated campaign for real, understandable change — even against Republican obstruction — can help voters understand that democracy can work for them when it isn’t hijacked by the super-rich and their servants.

The assault on the Capitol uncovered the true nature of right-wing Republican politics in America: a thinly veiled war on constitutional democracy and majority rule. The way to prevent the next authoritarian coup attempt is to build a robust democracy that demonstrates it is responsive to the needs and interests of real people.

A slap on the wrist for the coup plotters and a swift return to the status quo isn’t enough, as the beer hall putsch should have taught us. We need a real commitment to reverse the erosion of our democracy.

Mitchell Zimmerman is an attorney, longtime social activist, and author of the anti-racism thriller Mississippi Reckoning. This op-ed was distributed by OtherWords.org.