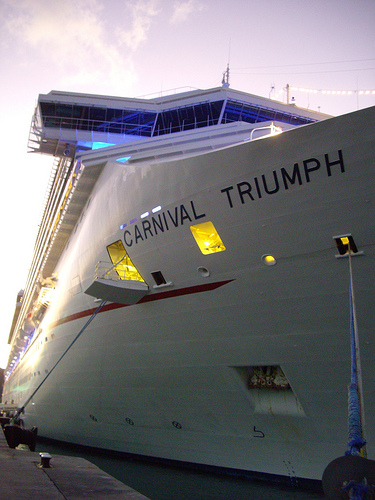 A Triumph of Sewage and Stench

It takes more than a nice cruise ship buffet to make a billionaire.
By Sam Pizzigati | February 27, 2013

Just over a year ago, the Costa Concordia, a Carnival Cruise ocean liner, ran aground on an Italian reef. Thirty-two died.

“We expect to fully recover from the ship incident,” the subsequent Carnival annual report told shareholders.

The Carnival Triumph, with over 4,200 passengers and crew onboard, lost all power after an engine fire. The ship drifted aimlessly in the Gulf of Mexico for days with toilets overflowing and food rotting. Raw sewage spilled into cabins. Passengers would later describe “an overpowering stench.” 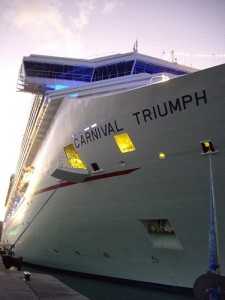 Carnival CEO Micky Arison never caught a whiff of this stench. He stayed far away. In fact, two days after the fire, with the Triumph still stinking, Arison showed up courtside in Miami to watch his beloved Miami Heat do basketball battle. He owns the Miami Heat.

Arison owns a great many things. Forbes puts his net worth at a clean $5 billion.

Last year, after the Costa Concordia tragedy, Carnival offered the 3,200 passengers who survived the wreck a refund, travel home, and a bit over $14,000 each.

Some perspective: The entire bill for the $14,000 checks — about $45 million — amounts to less than 1 percent of Arison’s personal fortune.

The Carnival Triumph survivors have received an offer, too. Passengers who waded through sewage on the Triumph for five days will get a refund, travel home, a credit toward a future cruise, and $500.

More perspective: Under U.S. airline regulations, passengers denied boarding on an oversold flight get up to $1,300 if the delay to their final destination costs them more than four hours.

Cruise giants like Carnival don’t face many regulations with that sort of bite. On the high seas, as Senator Jay Rockefeller points out, “the world is theirs.”

An international maritime organization does, to be sure, exist. But its guidelines don’t carry the force of law. Corporations can violate these guidelines and face no real consequences.

Those few maritime standards on the books that look really tough essentially only serve for show. All cruise ships, for instance, must now have auxiliary power systems to maintain propulsion and basic passenger services should a fire knock out the main power system, the fate that befell the Triumph.

This standard, rather conveniently, only applies to ships built after July 1, 2010 and doesn’t cover the Triumph, built in 1999, or just about every other cruise liner on the seven seas.

All these ships could, of course, retrofit to meet the new 2010 safety rule. But that retrofit would make a dent on corporate profit margins. And billionaire Carnival CEO Micky Arison doesn’t like to see anything dent his profits.

Dodging taxes and safety regulations certainly helps keep dollars flowing into the pockets of top cruise industry execs. But you don’t get to become a billionaire just by stiffing Uncle Sam and skirting safety rules. Moguls like Arison also never miss an opportunity to nickel-and-dime their passengers.

Passengers on cruise liners, for instance, used to have access to any on-board restaurant without paying anything extra. Now they pay extra if they want anything besides a buffet.

All cruise ship passengers, of course, have at least a basic level of personal affluence. Whatever shipboard indignities they suffer, in the end, pale against the indignities so many millions of families suffer today, on a daily basis, in Great Recession America.

But symbols do matter — and what more vivid symbol of the indignity our contemporary corporate-driven inequality imposes than the Carnival Triumph? Thousands of people adrift, going nowhere in a nightmare of sewage and stench, while a billionaire chief executive sits far away in a courtside seat and cheers.