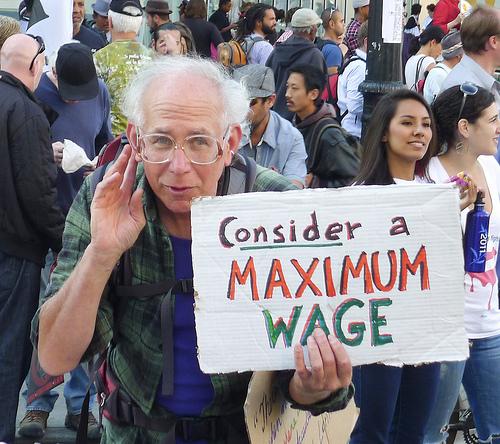 A Bold New Call for a ‘Maximum Wage’

How about taking a moment this Labor Day to reflect about those Americans who earn the least for their labor?

These Americans — workers paid the federal minimum wage — are now making $7.25 an hour. On paper, they’re making the same wage they made in July 2009, the last time we saw the minimum wage change. In reality, minimum-wage workers are making less today than they made last year because inflation has eaten away at their incomes. 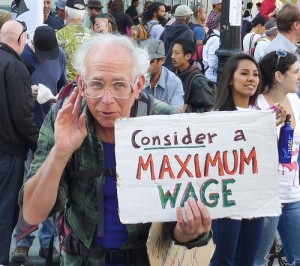 Figures like these don’t particularly upset many of our nation’s most powerful, in either industry or government. We live in tough times, the argument goes. The small businesses that drive our economy simply can’t afford to pay their help any more than they already do.

But the vast majority of our nation’s minimum-wage workers don’t labor for Main Street mom-and-pops. They’re employed by businesses that no average American would ever call small. Two-thirds of America’s low-wage workers, the National Employment Law Project documented in July, work for companies that have at least 100 employees.

The 50 largest of these low-wage employers are doing just fine these days. Over the last five years, these 50 corporations — outfits that range from Walmart to Office Depot — have together returned $175 billion to shareholders in dividends or share buybacks.

And the CEOs at these companies last year averaged $9.4 million in personal compensation. A minimum-wage worker would have to labor 623 years to bring in that much money.

So what can we do to bring some semblance of fairness back into our workplaces? For starters, we obviously need to raise the minimum wage. But some close observers of America’s economic landscape believe we need to do more. A great deal more.

Count Larry Hanley among these more ambitious change agents. Hanley, the president of the Amalgamated Transit Union, sits on the AFL-CIO’s executive council, the labor movement’s top decision-making body. He recently called for a “maximum wage,” a cap on the compensation that goes to the corporate execs who profit so hugely off low-wage labor.

Hanley wants to see this maximum defined as a multiple of the pay that goes to a company’s lowest-paid worker. If we had a “maximum wage” set at 100 times that lowest wage, the CEO of a company that paid some workers as low as $16,000 a year could waltz off with annual pay no higher than $1.6 million.

During World War II, labor leader Hanley points out, President Franklin D. Roosevelt called for what amounted to a maximum wage. FDR urged Congress to place a 100-percent tax on income over $25,000 a year, a sum that would now equal, after inflation, just over $350,000.

Congress didn’t go along. But FDR did end up winning a 94-percent top tax rate on income over $200,000, a move that would help usher in the greatest years of middle-class prosperity the United States has ever known.

Throughout World War II, FDR enjoyed broad support from within the labor movement — and the general public — for his pay cap notion. Now’s the time, Hanley believes, to put that notion back on the political table. We need, he says, “to start a national discussion about creating a maximum wage law.”

Hanley may just have started that discussion.

OtherWords columnist Sam Pizzigati edits Too Much, the Institute for Policy Studies weekly newsletter on excess and inequality. OtherWords.org