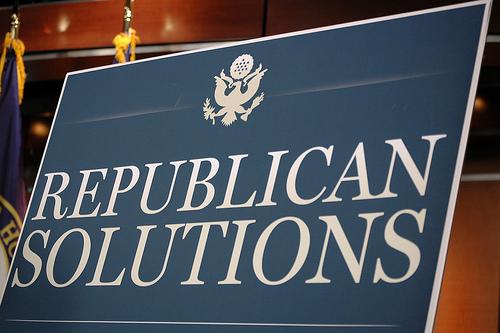 A Decade of Magical Tax-Cut Thinking

The 2001 Bush tax cuts added $2.5 trillion to the national debt and disproportionately benefited the wealthiest households. Have we learned anything?
By Chuck Collins | May 30, 2011

Republican leaders in Congress have a one-point program for whatever ails the nation: cut taxes for millionaires and large corporations.

These politicians are like my uncle who believed the solution to every problem was a wee glass of scotch. They live in a world of magical thinking.

GOP leaders argue that the budget deficit is the great moral issue of our day and requires great austerity.

The Republicans’ plan calls for reducing the top income tax rate on millionaires and big corporations from 35 percent to 25 percent — and slashing taxes on income from wealth by cutting the taxes on capital gains and dividends. The plan would accelerate the use of offshore tax havens for corporations to move profits overseas to avoid U.S. taxes.

Combined with proposed cuts in Medicare, college aid, environmental protection, elder services, and children’s health care, you get a pretty stark picture of the kind of America GOP leaders would like the bottom 98 percent of us to live in.

The lesson: Beware of any person or party that has a one-point program for everything. The path to our budgetary mess has no simple explanation. And the solution has no single remedy.

If a politician tells you we can solve our budget problems with spending cuts alone or solely by raising taxes, they are blowing smoke. Serious fiscal problem solvers advocate a mix of budget cuts and tax increases.

When faced with GOP magical proposals for additional tax cuts for millionaires and multinational companies, step away slowly, as if you were facing a cobra.

This week marks the 10th anniversary of the 2001 Bush tax cuts that went disproportionately to the wealthy. It’s hard to believe, but a decade ago, thanks to Clinton-era budget rigor, congressional budget analysts forecasted a $5.6 trillion dollar surplus over the subsequent 10 years.

President George W. Bush’s response to the surplus was a huge tax cut, signed into law on June 7, 2001. Six months later, after the 9/11 terrorist attacks and the launch of two wars, those projected surpluses vanished. In 2003, Bush and Congress instituted another tax cut, arguing it was the remedy for a sluggish economy.

Over this last decade, these two tax cuts have cost the nation $2.5 trillion in lost revenue. Almost 40 percent of the tax cuts went to the richest 1 percent of households, people whose annual family incomes exceed $380,000.

Our tax system is millionaire-friendly. The richest 400 taxpayers, whose average income is $270 million, pay about 18 percent of their income in taxes, the lowest effective rate since the 1920s. General Electric, Boeing, and more than 60 profitable Fortune companies pay no federal taxes, thanks to offshore tax dodges and other loopholes.

Spending cuts should start with our bloated Pentagon budget. We can save trillions by eliminating obsolete weapons systems and closing a third of U.S. military bases around the world that add little to our security. Cut corporate welfare for agribusiness and big oil companies, and we can raise another $1 trillion over the next decade.

We should close overseas tax havens, institute a modest financial transaction tax, and add new tax brackets for incomes over $1 million. This program wouldn’t just close the budget gap. It offers the added benefit of reducing the extreme inequalities that have led to the erosion of the U.S. middle class.

The road forward requires spending cuts and tax increases on the wealthy. But the first step is to renounce the GOP one-point program of tax cuts for millionaires and corporate tax dodgers.

Chuck Collins is a senior scholar at the Institute for Policy Studies where he co-edits the online resource www.inequality.org.