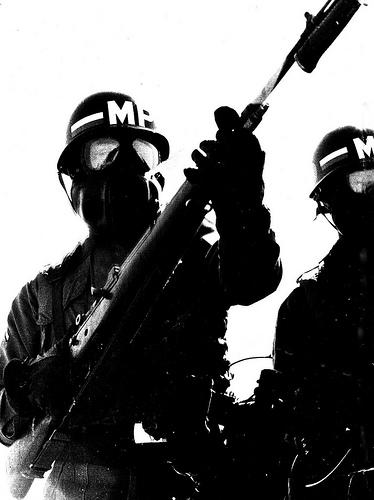 A Rotten Cop on the Beat

When one country polices the world, who polices the police?
By Roger Peace | August 6, 2012

In mid-July, relatives of three U.S. citizens killed by drone strikes in Yemen filed a wrongful death lawsuit against top security officials. Their complaint charges that the lethal strikes “violated fundamental rights afforded to all U.S. citizens, including the right not to be deprived of life without due process of law.”

This raises an important question: When one country polices the world, who polices the police?

In the aftermath of World War II, America’s leaders forged an internationalist foreign policy in defiance of popular pressure to return to “isolationism,” or conventional national defense. This internationalism had two tracks. One was rooted in U.S. expansionist and interventionist history and took the form of a “world policeman” role against communism. The other was based on the principle of collective security associated with the recently established United Nations. 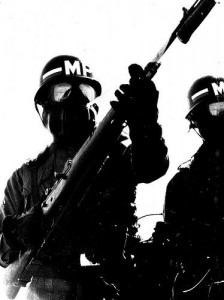 The U.S. “world policeman” role — a euphemism for extended U.S. power and influence — became the policy of choice, hailed as “protecting the free world.” The idea of working together with other nations to prevent war and solve common problems was relegated to areas where U.S. vital interests were not at stake.

U.S. interventions in Vietnam, Latin America, and elsewhere sparked public protests at home but didn’t fundamentally shift U.S. policies abroad. Nor did the end of the Cold War. Indeed, only one month after the Berlin Wall fell, U.S. forces invaded Panama, killing thousands of civilians in an effort to apprehend leader Manuel Noriega, whom the United States accused of drug running. The U.N. General Assembly condemned the Panama invasion as “a flagrant violation of international law,” but to no avail.

The 9/11 terrorist attacks engendered a new wave of regime-changing interventions. As part of an ill-defined “war on terrorism,” the United States began incarcerating people without trial in Afghanistan and Iraq. Now the United States is employing armed drones to assassinate suspected “militants” in the tribal areas of Pakistan as well as in Yemen and Somalia.

It’s time to revive the idea of collective security. No country, including our own, must be allowed to operate as a law unto itself. Nor is it in the interest of U.S. citizens to have other nations follow our example when it comes to international drone strikes. We need to establish international prohibitions on armed drones as well as cyber warfare and extraordinary renditions.

We also need a permanent U.N. security force to protect civilians from unruly forces in various parts of the world. Gaining international agreement for this will undoubtedly be difficult, but the process can be pushed forward on a country-by-country basis.

Roger Peace, an adjunct professor of history at Tallahassee Community College, is the author of A Call to Conscience: The Anti-Contra War Campaign (University of Massachusetts Press, 2012).
Distributed via OtherWords (OtherWords.org)