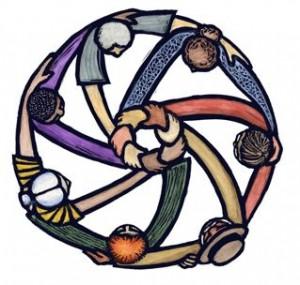 A Strategy for Coping with Unemployment

Resilience Circles are springing up across the United States.
By Sarah Byrnes | July 11, 2011

The jobless rate rose to 9.2 percent in June, which means yet more Americans are waking up to the disorienting experience of having no job to report to. How are they coping?

“These are hard times for a lot of people,” says Wendee Crofoot, who is unemployed in the Bay Area. But Crofoot belongs to a “Resilience Circle” — a small group of people in her neighborhood who meet to enhance personal security through connections, exchanges, and networking.

When Crofoot lost her job last month, she turned to members of the group for support. “My Resilience Circle makes me feel like I have a network of people who I can rely on,” she says.

The group has created a “time bank” to exchange time, skills, and goods. “As an unemployed person, I have more time, but less money,” she said. “It’s great to be able to barter and exchange for things I need. Plus, I get to meet people and network.”

Resilience Circles (also called Common Security Clubs) like Crofoot’s are springing up across the United States, adapting free tools provided by the Resilience Circle Network, including a seven-session curriculum to use in the initial meetings. After that, groups self-organize and choose their own activities, such as creating a time bank like Crofoot’s circle has, helping prevent foreclosures on their block, organizing community film screenings, or running workshops on how to preserve food.

Helping each other is at the heart of the experience. During the exchanging of “gifts and needs” in the fifth session, people write up and share their gifts — things they can offer —and their needs. For example, at my own circle, our facilitator offered to give bike tune-ups. One woman offered to run a sewing class for the group after several of us mentioned wanting to learn. The pastor of the church offered to cut hair, a dog-sitting and child care exchange began to bud, and people began brainstorming about how to find and share a 20-foot ladder.

Little exchanges like this help us slowly stretch our muscles for helping each other. They’re fun and can save us money, and they create relationships that can prove essential when hard times fall. A young man and his son facing foreclosure were able to move into the “in-law” apartment of an older couple they met through a Resilience Circle in Florida. That never would have happened without the “warm-up” the club provided.

Small groups like Resilience Circles are also perfect for brainstorming, networking, and launching entrepreneurial ventures. A man in Boston started a personal organizing business after his group helped him publicize and hone his skills. A woman in Maine began teaching exercise classes after she received tips and inspiration from her group.

Even if employment starts growing again at the rate it did in, say, January, it would still take well over a decade to get back to pre-2008 employment levels. That’s too long to wait.

Maybe the government can address the scourge of inequality and goose the economy back into some sort of robust state. But should the government try to return us to a pre-2008 model of debt-fueled economic growth? That’s a different question altogether.

As people meet in Resilience Circles, it’s the kind of question they’re pondering. For many, a new understanding of “security” begins to take shape. “I’m still devastated that I lost my job,” says Crofoot. “But I’m so delighted to be connected to the people in my circle. My connections with them are helping me feel more hopeful about the future.”

Sarah Byrnes is the Resilience Circles organizer at the Institute for Policy Studies. www.ips-dc.org