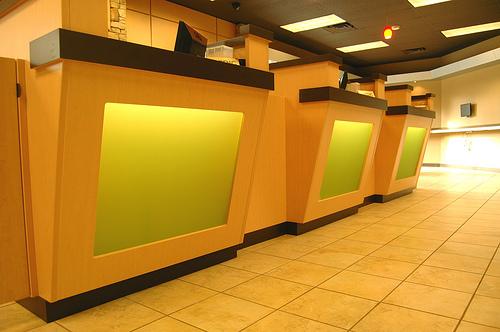 A Vanishing Act for Good Jobs

For those on the economic ladder's lowest rungs, the middle rungs have almost completely disappeared.
By Dashka Slater | September 24, 2012

Ashley Brown wants to be a bank teller. When I met her this past spring, the 26-year old single mother was cold-calling banks and credit unions, looking for one that might hire her. So far, she’d had one interview and a lot of unfriendly brush-offs. No offers.

Brown is one of those Americans whom Mitt Romney has dismissed as part of the 47 percent of us who are “dependent upon government” and therefore not worthy of his concern. I met her in Sacramento, California at a program called Job Club, which aims to help people on welfare find work.

Brown worked in a warehouse before being laid off, and while she was pregnant she attended business college to get a certificate in medical billing and coding. But warehouse work had taken its toll on her tiny frame, and she’d had no luck finding work in a medical office. And so she spent her days like so many others, looking for jobs that didn’t seem to exist in a city where unemployment hovers at 13 percent. “If I could just get my foot in the door,” she sighed. 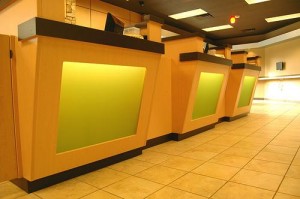 Times are tough for everyone. Most Americans have felt the impact of the Great Recession — although not, perhaps, Romney and his wealthy donors. But for those on the economic ladder’s lowest rungs, times have been hard for much longer. And they’re more likely to stay hard.

Recent studies have documented the polarization of the job market into what one team of economists has termed “lovely” and “lousy” jobs. The lovely jobs are highly paid and highly skilled. The lousy ones are dreary, menial, and low-paying. The jobs that are disappearing most rapidly from the labor market are the ones in the middle, the ones that were once the foundation of working class life.

These are the jobs that people like Ashley Brown aspire to — jobs like bank teller, cashier, shipping clerk, and machine operator. A recent study by economists Nir Jaimovich and Henry E. Siu found that in the last three recessions, job losses were concentrated among these easily automated middle-skill jobs. After the recession was over, those jobs never returned.

That means the jobs that are available to people without much experience or education are increasingly menial, transitory, and scarce. In the seven weeks I spent at Job Club, I watched people patiently work their way through ridiculously complex application procedures for jobs like hotel chambermaid, warehouse worker, and home health care aide. Yet even these jobs were usually out of reach. Those who did find work tended to get jobs that were temporary, part-time, or on commission. One guy got a job distributing flyers door to door. Someone else took a job with a collection agency. Two others were going door to door selling vacuum cleaners.

The people who got those jobs were happy to get them. They don’t need Mitt Romney to tell them that a steady paycheck is better than trying to make ends meet on a welfare check that’s too small to cover the rent. But before we chastise people for being dependent on government, we have to make sure they have an alternative. That means that the people who call themselves “job creators” have to actually create jobs.