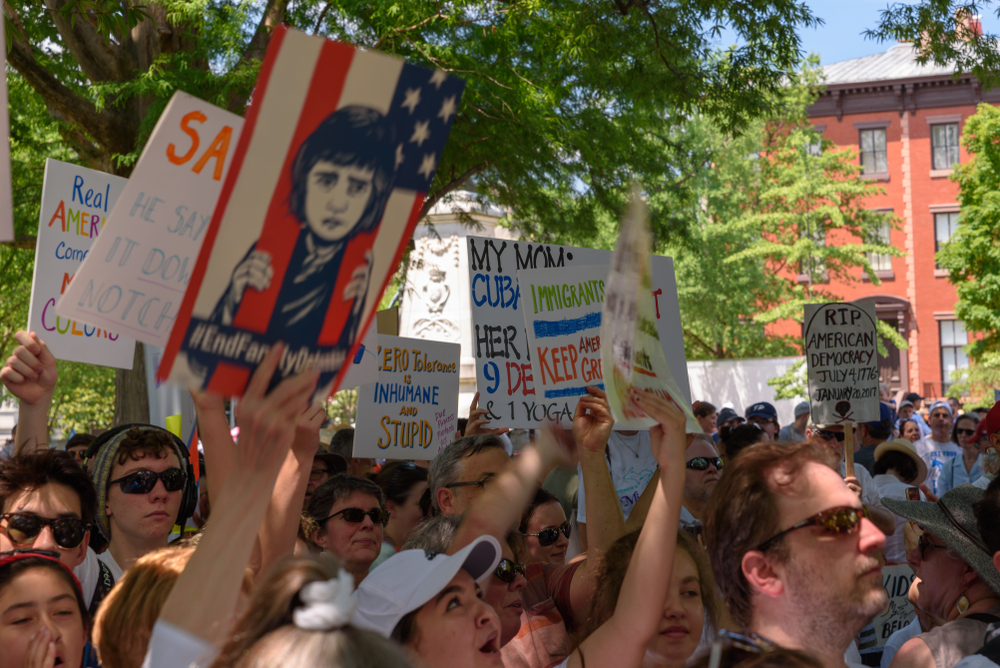 ICE is supposed to keep Americans safe. Instead, it's terrorizing refugees, families, and small children.
By Fizz Perkal | July 3, 2018

As someone who was born and raised in the border state of New Mexico, I’m very familiar with political speak about immigrants and the border, especially when it comes to talking about safety.

After 9/11, concerns about safety led to the passing of the Homeland Security Act, which created a new cabinet department as well as a new law enforcement agency: Immigration and Customs Enforcement, or ICE. ICE was given a never-before-seen level of criminal and civil authority — in theory, to keep Americans safe.

It’s now the largest investigative branch of the Homeland Security department. Unlike other law enforcement agencies like the FBI or DEA, ICE doesn’t answer to the Department of Justice, which for decades has at least paid lip service to due process.

Far from being a law enforcement agency, ICE has become the closest thing we have to a lawless organization.

Rather than keeping Americans safe, the organization has become a menace, wasting taxpayer money while doing tremendous violence to communities that pose no threat. From separating families to having 3-year-olds stand trial for deportation, and from staking out churches to stealing immigrants’ identities to open up fraudulent credit cards, ICE embodies cruelty.

In May, a transgender woman from Honduras named Roxsana Hernandez died in ICE custody in New Mexico. Roxsana came to the United States seeking asylum from persecution and violence in her home country.

Rather than being treated with the dignity and respect befitting all humans, and particularly those seeking asylum, she was detained by ICE and held in a freezing cold cell with the lights turned on 24 hours a day. This approach to detention is so common it has a name — the icebox, because the cells feel as cold as a freezer.

As a queer, gender non-conforming New Mexican, this hit close to home for me. Not only did Roxsana come to this country because she wanted the safety to live her life as her authentic self, but she died in Albuquerque, my hometown. She died a terrifying and lonely death due to complications of pneumonia, likely caused by the frigid conditions of her detention.

I have to say: Her death certainly doesn’t make me any safer.

In another devastating case, Pablo Villavicencio, an undocumented man originally from Ecuador, was detained by ICE while he was delivering pizza to a military base in New York City. Pablo lives in New York with his wife and young children, all of whom are U.S. citizens. His detention and possible deportation certainly won’t make me, or anyone else, any safer.

ICE was created to protect the U.S. from terrorism. But it seems the biggest threats they can identify are refugees and workers supporting their families. If you ask me, ICE is the one terrorizing people.

Unfortunately, ICE has become even more aggressive in the past 18 months — and not just against people from Mexico and Central America. The number of Haitians deported rose from 300 in 2016 to 5,500 in 2017 — as if almost the entire city of Aspen, Colorado were deported. The rate of deportation for people from Somalia nearly doubled during the same time.

At this point, ICE’s targeting of families and non-threatening individuals makes it clear that it’s beyond reform. Immigrants aren’t threats to the nation’s security — they’re people, just like you and me, who are trying to make the best of their circumstances.

We need to find better ways to make sure our communities are safe without relying on a lawless, violent organization. It can’t be that hard — we did it for centuries before the Homeland Security Act. ICE must be abolished.

Fizz Perkal is a Next Leader at the Institute for Policy Studies. Distributed by OtherWords.org.