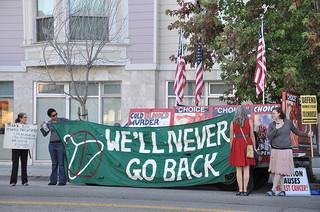 Although its opposition to abortion and family planning probably won't foment a landslide away from the Catholic Church, the steady erosion of membership is increasing.
By William A. Collins | May 14, 2012

You have to hand it to the Catholic bishops. They not only define abortion, but also birth control, as murder. And they’re willing to pin the very future of their Church to this arcane belief. Sounds a bit like the Republican Party.

Public reaction to this rather extreme ideology included a full-page ad in The New York Times by the Freedom from Religion Foundation in March. The headline read, “It’s Time to Consider Quitting the Catholic Church.” It went on to list controversial social issues, including contraception, where the Church seems to have lost its moral footing. Although its opposition to abortion and family planning probably won’t foment a landslide away from the Church, the steady erosion of membership is increasing, both here and in Europe.

The irony of the research data is perhaps what makes this issue so mind-boggling. It’s no secret that as sex education and access to birth control rise, teen pregnancies, other unwanted pregnancies, and abortion all decline. This isn’t, as they say, rocket science. Voters, including Catholics, grasp it perfectly well. 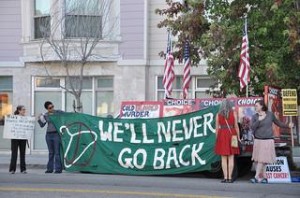 But let us not just beat up on the errant bishops. Different players successfully poisoned the Republican primary debate and routinely threaten Southern and Midwestern abortion clinics. Those roles are largely filled by evangelical Protestants. It’s nice to see that mindlessness, a mean spirit, and a fixation on sex can be so non-sectarian.

The state-by-state evidence could also inspire wonder. As the national teen pregnancy rate declines to its lowest level since the mid-1940s, the rate remains high in culturally conservative states like Arkansas, Texas, and Oklahoma.

There’s another aspect of the teen pregnancy game: poverty. It’s obviously the poor who most need help with reproductive health costs. With all those spending cuts at the state and local levels, their unplanned pregnancy rate has actually gone up.

President Barack Obama isn’t immune from this political tar ball either. He may be pro-choice, but in December Kathleen Sebelius, his Health and Human Services secretary, overruled the Food and Drug Administration’s decision to let girls under 17 buy an emergency “morning after” contraceptive pill without a prescription. Thus, potentially pregnant 16-year olds will still need a prescription (read, mom or pop’s permission) to get that pill — along with the domestic abuse that too often accompanies such a disclosure.

That was just a little sop to the anti-birth control movement.