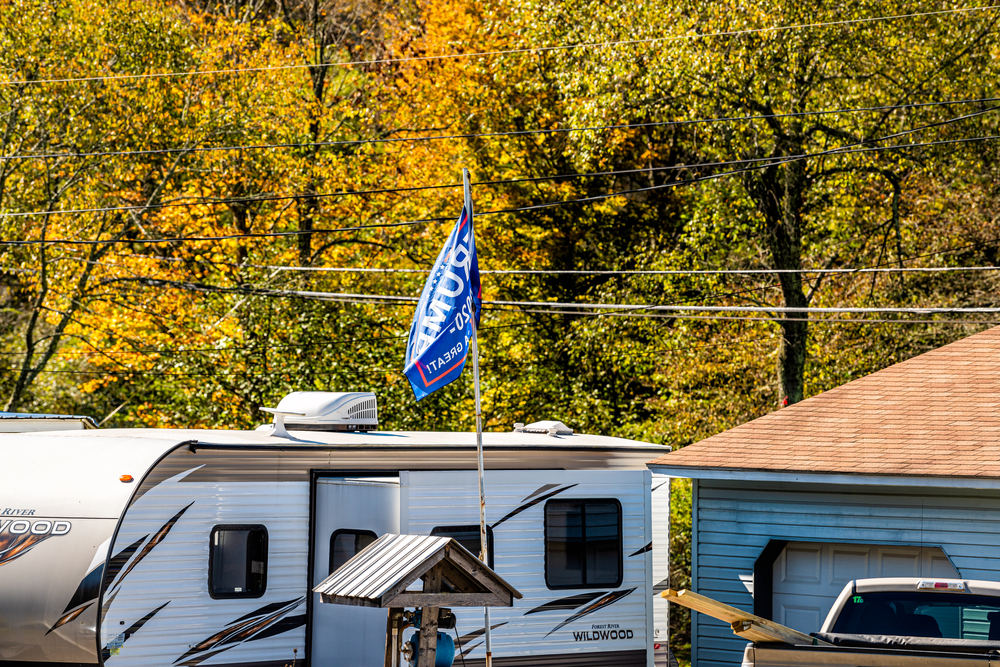 A Trump flag flies from a trailer home in West Virginia (Shutterstock).

Address the Stagnation That Paved the Way for Trump

Trump had plenty of rich supporters, but left-behind communities have been fertile ground for extremism throughout our history.
By Jill Richardson | January 13, 2021

Donald Trump won’t be around forever. But the political crises his attacks on democracy have caused will outlive his one-term presidency.

For one thing, the nearly 150 congressional Republicans who supported his attempted coup will probably remain in office, even though the 14th Amendment bans anyone “engaged in insurrection or rebellion against the [the United States]” from office.

For another, Trump’s attempts to discredit the results of the election — which began before the 2016 election and have continued ever since — have convinced a significant portion of Republicans to doubt President-elect Biden’s legitimacy. Sixty court rulings to the contrary, including many by Trump-appointed judges, have done little to change their minds.

The irony is that, if anything, our election system is rigged against Democrats. Gerrymandering, the Electoral College, and voter suppression all enable Republicans to win power far above their actual popular support. Still, Joe Biden and Kamala Harris pulled off a large enough victory to win anyway.

But, given that some Republicans are so committed to denial that they are willing to throw away our democracy, what do we do now? How do we make sure the threat to our democracy — and many lives — stops here?

Clearly, there needs to be accountability for the perpetrators of the coup attempt itself. But we also need to take a hard look at some of the social conditions that foster the far-right radicalization that sustained it.

According to sociologists Rory McVeigh and Kevin Estep, Trump originally found his strongest support in communities with a low percentage of college graduates. And within these communities, support for Trump went up even more when the community had high unemployment and low median income.

That doesn’t mean Trump supporters are all working-class or low-income. As other studies have pointed out, many of Trump’s earliest supporters were quite well-to-do. And many other wealthy Republicans simply went along to preserve their power (or tax cuts). Shame on them. They can’t say nobody saw it coming.

Still, there’s no question that some struggling communities proved fertile ground for Trumpism.

President Obama came into office on the heels of an economic collapse that hurt people who never went to college the most, but he presided over a recovery that helped them the least. And even before the crash, these communities had lost jobs due to a host of establishment-friendly economic policies — sometimes called “neoliberal globalization” — like free trade and financial deregulation.

Neoliberal globalization was mostly supported by both parties — with a few exceptions.

On the left, critics like Bernie Sanders promised a progressive vision for reform. But on the right, Donald Trump scapegoated immigrants and promised to bring back manufacturing jobs.

In this, Trump was following a tried-and-true playbook for right-wing populist demagogues. As social scientist Ruth Wodak explains, he appealed to his base as the “true” Americans and gave them scapegoats to blame with simple solutions to complex problems. He told them not to trust the establishment — and he offered himself as the savior who would fix their problems.

McVeigh and Estep point out that historically, white nationalist movements have gained traction in the U.S. when certain white Americans felt they were losing political and economic power and social status all at once.

The second rise of the KKK — in the 1920s — bears the most similarity to the present day. Then as now, a changing economy and political climate had disadvantaged a group of white Christians who were previously better off. In both cases, they turned their animosity to immigrants.

Of course, this is no cure at all. In the end, Trump did plenty to hurt immigrants but failed completely to bring back manufacturing jobs. Instead, he mismanaged a pandemic that’s killed hundreds of thousands and only deepened pre-existing inequalities in our country.

The question now is how to put the genie back in the bottle. The Biden administration has its work cut out for it — from ending the pandemic to promoting racial justice and strengthening our democratic institutions following this four-year assault on them.

But we should add to that pile: addressing the economic stagnation that paved the way for Trumpism. Better jobs and opportunities won’t cure racism — that’s a whole other task — but they make it more difficult to weaponize.

White nationalism has always been a part of our history. It just goes dormant and rears its head again when conditions allow it. It’s threatened our democracy before, during the Civil War and many times since.

We must not allow it to do so again.