We Agree Assault Is Bad. Let’s Agree on How to Punish It.

Kevin Spacey can't play the president on TV because he committed sexual assault. Our real president brags about assault and stays in office.
By Jill Richardson | December 13, 2017

Our national debate about sexual harassment and assault seems to be missing a bit of nuance. As a woman who’s been sexually harassed and assaulted many times, here’s how I see it.

Sexual predators aren’t the same as pigs. Roy Moore is a predator. His systematic, frequent pursuing of teenage girls at a shopping mall when he was in his 30s shows a pattern of intentional behavior. He was after children too young to consent to sex.

Film producer Harvey Weinstein, who systematically entrapped women trying to make it in the film industry, is a predator. A monstrous one.

A pig is the man who stares at your chest instead of your face when talking to you. A pig might try to touch you under the pretense of being friendly, or joking, or “accidentally” brushing up on you.

The pig might think he’s being hilarious or just having good fun. He may even think he’s flattering you. You should feel grateful he chose you as a woman worthy of his sexual attention. 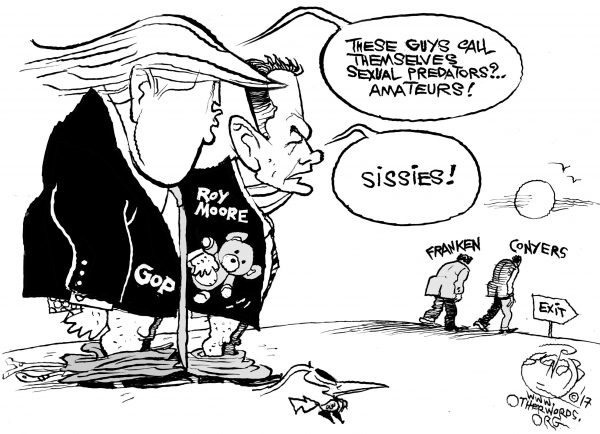 The last pig I encountered smacked my behind. Twice. The first time it happened, I didn’t know what to say. It wasn’t OK, but what do you say?

As a woman I’m socialized to always remain polite. Since I couldn’t think of an appropriate, non-confrontational polite response, I said nothing.

The second time, I was ready. This wasn’t OK, and I was willing to risk an unpleasant confrontation.

“Because I didn’t give you permission,” I snapped back.

“And?” he said. He held up one finger, as if he were making a list and I’d just given him one item — but there had to be more.

“I didn’t give you permission” is the only reason I need. But I added, “And were aren’t dating.” He nodded, accepting my reasons. I was enraged. “Don’t touch my butt” shouldn’t require explanation or justification.

There seems to be a spectrum, from the small-time pig to the most heinous sexual predator. And different punishments fit different crimes. It also matters if the perpetrator apologizes, and if he stops the problematic behavior.

Yet the way we’re haphazardly applying consequences doesn’t reflect the severity of the crime, the trustworthiness of the evidence, or the sincerity of the apology.

Donald Trump bragged about assaulting women, and many women have come forward to allege he’s assaulted them, yet he’s in the White House. Roy Moore pursued teenage girls when he was an adult, yet he still retained the support of most Republicans.

Senator Al Franken, a mere pig by comparison, resigned his seat after realizing he was wrong for groping and kissing women without their consent.

Actor Kevin Spacey, who played the president on the TV show House of Cards, lost his job after a wave of assault allegations surfaced against him. But while Spacey can’t play a president on TV anymore, a man who openly bragged about committing assault still sits in the real Oval Office.

And Clarence Thomas, a man once accused of serial sexual harassment, is still on the Supreme Court.

Our conversation must advance from simply agreeing to take sexual harassment and assault seriously to agreeing upon a fair and consistent way to punish it.