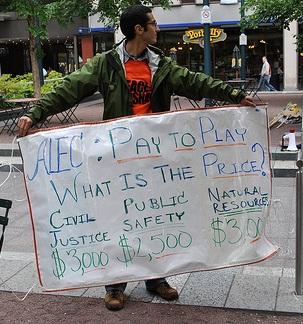 Not only have the people rebelled, they've also organized and mobilized.
By Jim Hightower | April 30, 2012

No one likes a smart aleck — or a stupid one, for that matter.

A really stupid one is called ALEC, the American Legislative Exchange Council, which masquerades as an “educational” group that simply assists state officials with policy research. In fact, it’s a corporate-financed, far-right front group that writes and aggressively pushes anti-worker, anti-consumer, anti-environmental, anti-immigrant, and other extremist “anti-people” legislative proposals.

ALEC’s operatives take these cookie-cutter bills from state capitol to state capitol, getting Republican governors and key legislators to introduce them. Then the organization helps organize astroturf campaigns to ram such ugliness into law. 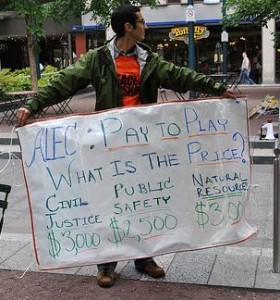 Gov. Scott Walker’s repressive agenda in Wisconsin is an ALEC product. So is Arizona’s war on Latinos, as is Florida’s murderous “stand your ground” shoot-em-up law. However, all this success led ALEC to get stupid. Its leaders got to thinking they were bulletproof, that they could shove this stuff down people’s throats all across the country — and the people would just accept it.

That was wrong. In fact, it was stupidly arrogant. Not only have people rebelled, they’ve also organized and mobilized. Groups like the Center for Media and Democracy, Color of Change, Common Cause, Occupy Wall Street, and People For the American Way have rallied grassroots people to hit ALEC where it really hurts: its pocketbook. Suddenly key corporate sponsors of this extremist organization were hearing from outraged citizens (and customers) — and now company after company is withdrawing its sponsorship.

To connect with these various efforts, go to www.AlecExposed.org