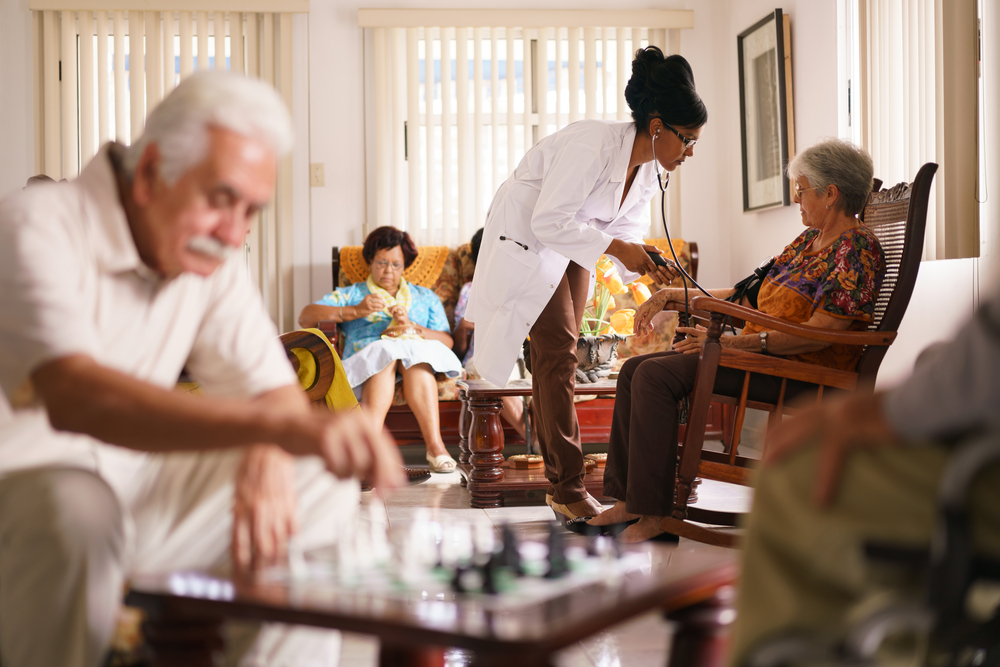 By 2035, seniors will outnumber children. A new plan in Washington state shows how we can care for them — and for their caretakers.
By Sarah Anderson | May 21, 2019

By 2035, seniors are projected to outnumber children in the U.S. population.

Maybe then we’ll look back and credit Washington state activists for being on the forefront of tackling America’s elder care crisis. On May 13, the state became the first in the nation to adopt a social insurance program for long-term care benefits.

“This is a huge victory for organizing and people power, for care and caregiving, and for older adults and people with disabilities,” said Josephine Kalipeni of Caring Across Generations, one of more than 20 groups that formed Washingtonians for a Responsible Future to push the path-breaking legislation.

Nationally, our long-term care financing system is broken. Medicare doesn’t currently cover home care or nursing facility care, while Medicaid coverage varies widely by state. To qualify, you have to meet poverty criteria, which requires people to spend down nearly all of their savings before getting coverage.

So what do people do?

For the richest 1 percent, there’s a growing market for luxury care communities. Vi Living, for example, has 10 facilities across the country that feature 24-hour valets, gourmet meals, indoor pools, and other amenities. At their Palo Alto development in California, entrance fees run as high as $6.5 million.

Most families obviously can’t afford that. Even typical out of pocket costs for professional home care, which run about $46,000 per year, are often out of reach. Many people who need care end up relying on family members, primarily women.

In fact, an estimated 60 percent of unpaid caregivers in the United States are women, and they pay much higher economic costs for taking on this role than men. More than a quarter of women caregivers who work are forced to shift to less demanding positions, or else give up their jobs entirely.

Even with support from family and friends, the lack of a strong long-term care system leaves many elderly and disabled Americans suffering a severely reduced quality of life. One survey found that nearly 60 percent of seniors with seriously compromised mobility weren’t able to get out of their house. Another 25 percent said they often remained in bed, while 20 percent went without getting dressed.

The new Washington state program will use a paycheck deduction of 58 cents out of every $100 in income to pay for care in people’s homes or nursing facilities, as well as other services like wheelchair ramps and rides to the doctor. Starting in 2025, eligible participants will receive up to $100 per day, with a lifetime maximum benefit of $36,500.

Caring Across Generations, a national campaign co-chaired by Jobs With Justice and the National Domestic Workers Alliance, had already notched a long-term care victory in Hawaii.

While not an insurance trust like the Washington state model, the Kapuna Caregivers program, launched in 2017, provides subsidies of $70 per day for people who are both taking care of family members and working outside the home at least 30 hours a week. The funds can be used for services for the elderly, including professional home care.

At the national level, Senators Cory Booker, Kirsten Gillibrand, Kamala Harris, and Elizabeth Warren have all endorsed the Bernie Sanders Medicare for All plan. It includes long-term care coverage and provisions for assistance with daily activities, such as eating, bathing, preparing meals, and housekeeping, whether provided by nursing homes, professional home care workers, or a family caregiver.

Now Caring Across Generations aims to help build campaigns in more states for Washington-style insurance programs, as a way to help build momentum for federal reforms like these. As Kalipeni put it, “One state down, 49 to go!”

Sarah Anderson directs the Global Economy Project at the Institute for Policy Studies and co-edits Inequality.org, where an earlier version of this op-ed appeared. Distributed by OtherWords.org.