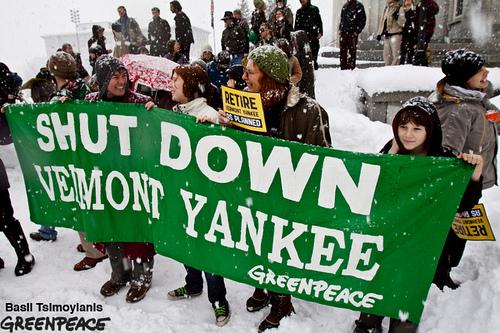 Japan's nuclear disaster should serve as a wake-up call for the United States.
By Robert Alvarez | June 6, 2011

Now that many Americans have stopped paying attention to Japan’s nuclear catastrophe, shocking new details about its severity are finally coming to light.

The U.S. Nuclear Regulatory Commission recently revealed that the cores of three of the Fukushima Dai-Ichi nuclear station’s reactors started to melt within hours after the loss of offsite power, right after the March 11 earthquake and tsunami. Tokyo Electric Power, which owns the wrecked reactors, has announced that the accident probably released more radioactivity into the environment than the Chernobyl debacle. That would make it the worst nuclear accident on record. Meanwhile, a nuclear waste advisor to the Japanese government reported that about 373 square miles near the power station — an area roughly 17 times the size of Manhattan — may now be uninhabitable.

The Fukushima accident should be a wakeup call for the United States to address the hazards posed by our own dangerous spent fuel pools at nuclear reactors. They are a time bomb. America’s reactors have generated about 65,000 metric tons of spent fuel, of which 75 percent is stored in pools, according to Nuclear Energy Institute data. No other nation has generated this much radioactivity from either nuclear power or nuclear weapons production.

Nearly 40 percent of the radioactivity in U.S. spent fuel is cesium-137. The 4.5 billion curies of radioactive cesium in U.S. spent reactor fuel is roughly 20 times more than what all worldwide atmospheric nuclear weapons tests released. The United States has 31 boiling water reactors (BWR) with pools elevated several stories above ground, similar to those at the Fukushima Dai-Ichi station. Consider this: the pool at the Vermont Yankee reactor, a BWR Mark I (the same design as the four crippled Fukushima nuclear reactors), currently holds nearly three times the amount of spent fuel stored at Dai-Ichi’s Unit 4 reactor.

As in Japan, spent fuel pools at U.S. nuclear power plants don’t have steel-lined, concrete barriers that cover reactor vessels to prevent the escape of radioactivity. They aren’t required to have back-up generators to keep used fuel rods cool if offsite power is lost.

For nearly 30 years, Nuclear Regulatory Commission waste-storage requirements have remained contingent on the opening of a permanent waste repository that has yet to materialize. Now that the Obama administration has cancelled plans to build a permanent, deep disposal site at Yucca Mountain in Nevada, spent fuel at the nation’s 104 nuclear reactors will continue to accumulate and is likely remain onsite for decades to come.

The U.S. government should promptly take steps to reduce these risks by placing all spent nuclear fuel older than five years in dry, hardened storage casks like Germany did 25 years ago. It would take about 10 years at a cost between $3.5 and $7 billion. If the cost were transferred to energy consumers, the expenditure would result in a marginal increase of less than 0.4 cents per kilowatt hour for consumers of nuclear-generated electricity. Despite the destruction wreaked by the earthquake and tsunamis, the dry casks at the Fukushima site were unscathed.

Money could also be allocated from the $18.1 billion in unexpended funds already collected from consumers of nuclear-generated electricity under the Nuclear Waste Policy Act to establish a disposal site for high-level radioactive wastes.

After more than 50 years, the quest for permanent nuclear waste disposal remains illusory. One thing, however, is clear, whether we like it or not: the largest concentrations of radioactivity on the planet will remain in storage at U.S. reactor sites for the indefinite future. In protecting America from nuclear catastrophe, safely securing the spent fuel should be a public safety priority of the highest degree.

Robert Alvarez, an Institute for Policy Studies senior scholar, served as a Senior Policy Advisor to the Secretary of Energy during the Clinton Administration and authored the recently-released report, Spent Nuclear Fuel Pools in the U.S.: Reducing the Deadly Risks of Storage, available for download at www.ips-dc.org.