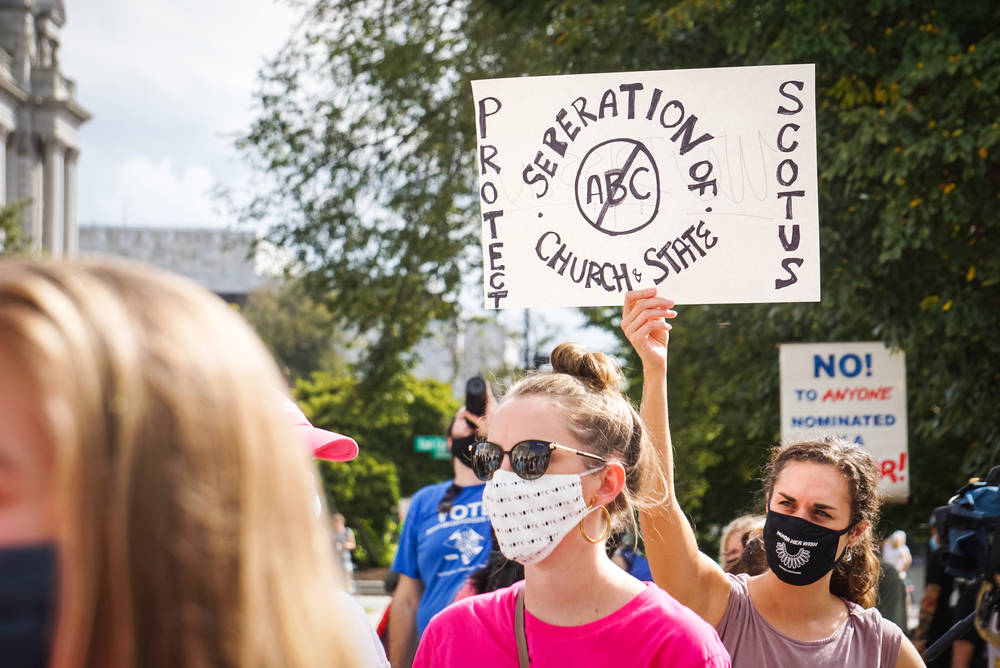 Amy Coney Barrett Has No Business Ruling on This Election

The president has openly said he expects her to back him in a contested election. She should recuse herself — and we should resist her.
By Rev. Susan K. Smith | October 7, 2020

Well before Amy Coney Barrett was nominated to the United States Supreme Court, every step in the frenzied process had seemed terribly amiss.

Senate Majority Leader Mitch McConnell and his party are playing by two sets of rules, ramming through Donald Trump’s nomination to fill a Supreme Court vacancy during an election year, despite McConnell’s refusal in 2016 to hold a hearing for President Obama’s nominee, Merrick Garland.

McConnell claimed at the time that no Supreme Court nomination should be processed in an election year, and that “the people should decide” after the election. Four years later, “the people” apparently only includes those whom McConnell decides should be considered.

As polls continue to indicate that Trump may lose the election, McConnell has thrown away his concern for “the people” out with the garbage in fealty to Trump.

Now comes Barrett, whose record is quite troubling.

Barrett will likely provide the final vote to gut the Affordable Care Act, which could throw 20 million Americans off their health insurance. She may also help overturn Roe v. Wade. Both are goals that conservatives have tried to achieve for years.

She is also likely to vote against Black people’s civil rights, as she has in the past. Conservatives will likely try and soften this record by noting she is the mother of two adopted Black Haitian children — despite her nomination by a president who called that country a “s—hole.”

In addition to Barrett’s concerning record, Trump has admitted outright that he needs this vacancy filled immediately to give him a conservative majority on the Supreme Court to rule on cases that could emerge out of a contested election.

Stunningly, Barrett recently indicated in her Senate questionnaire that she has no intention of recusing herself from such cases.

In the past, many Americans believed that our government was fool-proof against authoritarianism. There was a sense that ethics, protocol, and precedent would prevail in our political and legal systems. But for many of us, that trust has since evaporated.

The Trump administration has shown that they believe the rich and powerful are above the law. They call for “law and order,” but do not believe it applies to them. Now it seems that Barrett may join their ranks.

For months, Trump has spread misinformation about the integrity of our elections. He has called for his base to go to the polls on Election Day to intimidate voters, and has encouraged people to break the law and vote for him twice. He has refused to commit to a peaceful transfer of power and has been clear that he will rely on the Supreme Court to determine the winner of the election.

That should be evidence enough that this president is an agent of chaos who is intent on dismantling our government, and our democratic norms and values. There are many reasons not to confirm Amy Coney Barrett to the Supreme Court, and we will raise our voices about all of them.

But if she is confirmed, out of love for her country, respect for American democracy, and her professed commitment to God, Barrett should stand firm against Trump’s lawlessness and lack of moral principle and recuse herself from election-related matters.

That’s the least she can do.

Rev. Susan K. Smith is an ordained minister and the director of Crazy Faith Ministries in Columbus, Ohio. She serves on People For the American Way Foundation’s African American Ministers In Action. This op-ed was distributed by OtherWords.org.