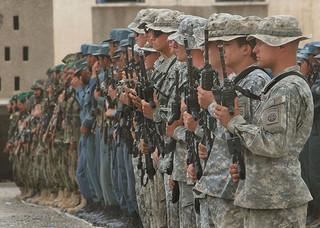 An Exit Strategy for Afghanistan

The United States can't abandon the country, but our troops must leave.
By Jim Cason | April 23, 2012

Here in Washington, it’s easy to find boosters for the current U.S. war strategy in Afghanistan. Outside of Washington, it’s harder. A CNN poll late last month found that three-quarters of Americans now oppose the war and more than half would like U.S. combat troops leave Afghanistan sooner than 2014, their scheduled withdrawal date. France, Spain, and Australia are all planning to accelerate the withdrawal of their soldiers from Afghanistan.

It’s easy to see why so many coalition countries are bolting. More than 10 years after the U.S. invasion, the goals of the continuing U.S. occupation are unclear, the insurgency is powerful, and the violence continues. Almost every month, Afghan soldiers and police turn their guns on the U.S. troops and military contractors training them. In mid-April, anti-government insurgents staged a coordinated series of attacks in four provinces in one day. This set of violent actions suggests a very well organized military force that’s unlikely to go away anytime soon.

The late May summit of NATO leaders in Chicago could mark a turning point. But to what? It’s time for the debate to move away from simplistic discussions of “winning” or leaving. That may be difficult in an election year when Democrats and Republicans alike are trying to score political points. But it’s what our country needs to do.

The U.S. can’t abandon Afghanistan, but our troops must leave. 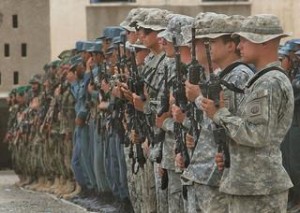 The manner in which the U.S. military withdraws matters. A responsible withdrawal means acknowledging that military force isn’t contributing to a political solution in Afghanistan. The U.S. military invasion of Afghanistan has cost tens of thousands of lives and billions of dollars, yet the country is less stable now than at any time since September 2001. Rather than quelling the violence, the presence of foreign forces is uniting extremist groups and feeding recruits to the Taliban, criminal gangs, and al-Qaeda.

U.S. commentators often say Americans are “tired” of the Afghanistan war. I doubt that anyone is more tired and frustrated by this war than the people of Afghanistan.

The U.S. troop withdrawal should be coupled with a willingness of U.S. officials to take political risks by supporting talks among all Afghan groups. “This war is going to end in a negotiated solution that involves the Taliban and the government in some way,” James Shinn, an assistant secretary of defense in the George W. Bush administration, told Charlie Rose.

And it isn’t just the Taliban. Warlords, regional leaders, and Afghanistan’s neighbors also have a stake in what happens. Yet every news report of U.S. efforts to support negotiations brings attacks from Congress and politicians that the United States is accepting “defeat” in Afghanistan.

Washington needs to begin talking to Pakistan as well as the rest of Afghanistan’s neighbors, who are often left out of the picture. Did you know that millions of people in Iran rely on water that flows from Afghanistan, that China also shares a border, and that India and Russia are close enough to be concerned?

With the anniversary of Osama bin Laden’s assassination and the NATO summit coming up in May, you’ll be hearing a lot more talk about Afghanistan. In this election year, too many politicians will be reluctant at best to take the risks for peace, such as talking to the Taliban and Iran, that may be necessary to support efforts to build a lasting peace.

But after a decade of fighting, the United States needs to do just that. Negotiations need to be coupled with a timetable for the responsible withdrawal of U.S. and other international troops from Afghanistan, a unilateral end to U.S. offensive military operations, and financial support for rebuilding the Afghan economy.

We should all watch carefully to see if our political leaders have the courage to follow this approach.

Jim Cason is the associate executive secretary for campaigns at Friends Committee on National Legislation, a Quaker lobby in the public interest. www.fcnl.org
Distributed via OtherWords (OtherWords.org)