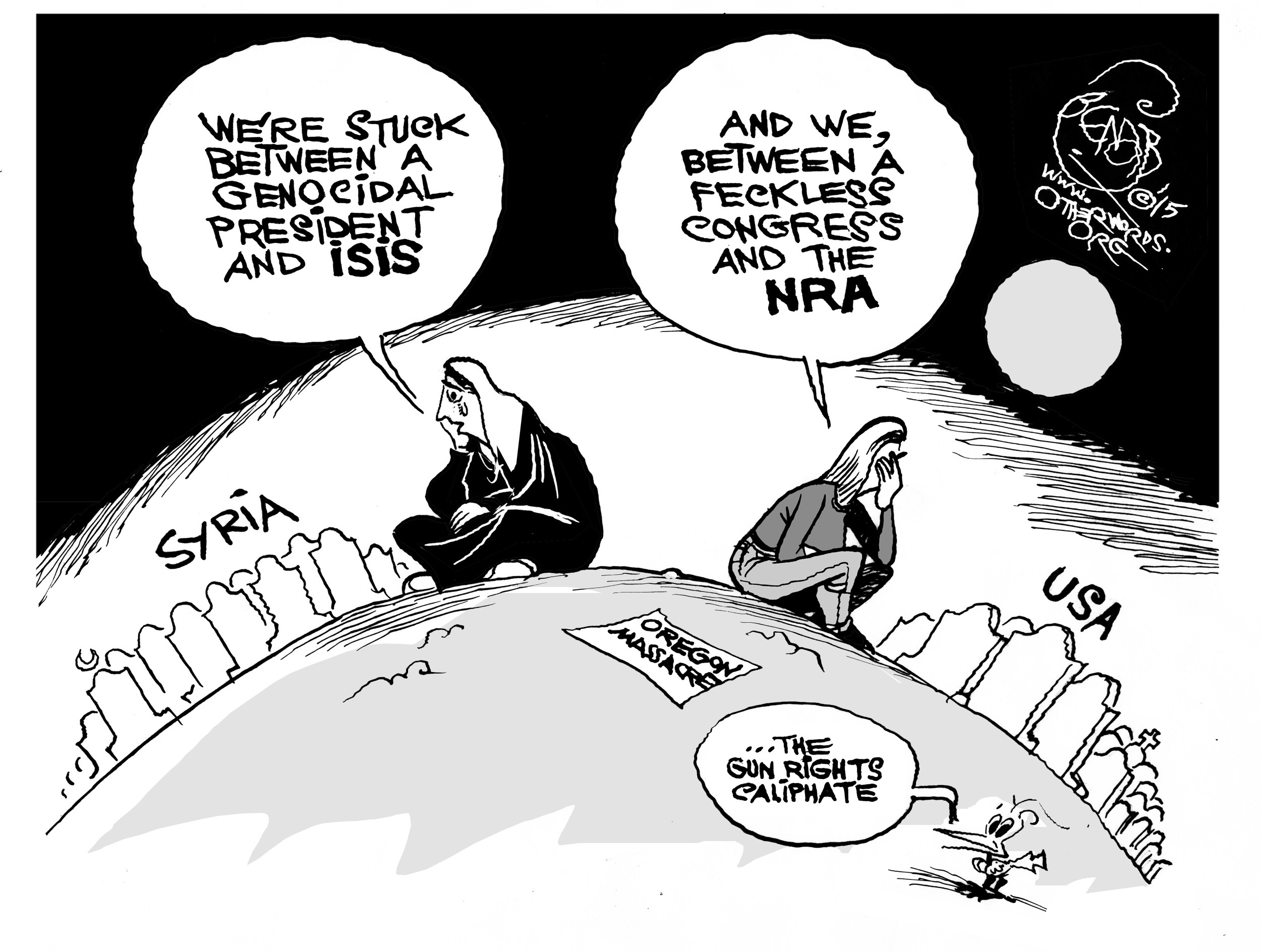 Two Sides of the Gunslinging Crisis, an OtherWords cartoon by Khalil Bendib

Another Day, Another Massacre

Fear and distrust keep many Americans attached to the very weapons that kill thousands of us each year.
By John Morlino | October 14, 2015

Yes, it’s happened again. A man with a legally acquired arsenal walked onto a college campus. Moments later, 10 people were dead, and nearly as many wounded.

Sick to your stomach? Of course you are. Surprised? Didn’t think so.

Like Aurora, Newtown, and a lengthy list of similar tragedies, the October 1 mass shooting at Umpqua Community College in Oregon aimed the spotlight on the debate over guns in America. But there shouldn’t be a debate at all.

Arguing that guns are a sacred part of our culture just doesn’t cut it anymore. They’re instruments of death. Nothing else you can own can kill more easily or efficiently.

Guns in private homes extinguish the lives of loved ones far more often than they prevent the advance of an intruder. Children shoot other children. Adults shoot their spouses and their children. Accidental death or suicide is just a trigger pull away.

This, apparently, is the price we’ve agreed to pay to uphold a convoluted interpretation of the Second Amendment. 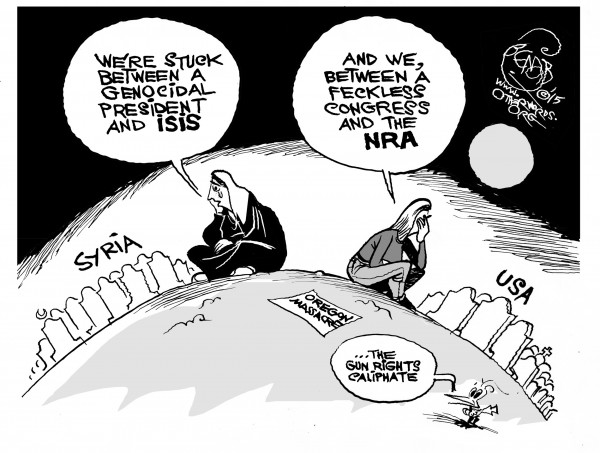 Two Sides of the Gunslinging Crisis, an OtherWords cartoon by Khalil Bendib

Sure, there’ll be calls for background checks to keep these weapons away from people stricken with severe mental illness, served with a restraining order, or convicted of violent crimes. But gun owners appear to have nothing to worry about.

After all, who’s going to suggest disarming ourselves completely?

From the Brady Campaign to Everytown for Gun Safety and Americans for Responsible Solutions, no prominent organization purportedly working to end gun violence — actually, they prefer the word “reduce” — has been willing to explicitly endorse giving up our firearms.

Instead, some of them — along with nearly any elected official you can think of — seem to go out of their way to express support for the Second Amendment. “Sensible” gun control, they say, is their objective.

Making it harder for the most troubled among us to acquire a gun would, of course, be a good thing. As would comprehensive mental health care for all, and a ban on assault weapons.

Yet well-intentioned as this strategy may be, it’s cursed with a deadly flaw: There’s no guarantee that anyone deemed a “responsible gun owner” today will still be one tomorrow.

The human mind is ever-changing. And there’s no end to the number of things that can send people into a nosedive — disintegrating relationships, devastating unemployment, unlucky biology, profound trauma. Passing a background check on a given day does nothing to ensure that a person buying a gun will remain emotionally stable for the rest of his or her life.

So how do we dig ourselves out of this mess?

The answer, I believe, lies in confronting the two-headed monster that’s left us in a state of perpetual paralysis.

Fear and distrust lurk beneath our collective psyche.

For example, people who wholeheartedly distrust our leaders delude themselves into thinking that, if properly armed, they’ll prevail in an apocalyptic shootout with the government.

Some gun buyers fear the neighborhood “bad guy” and comfort themselves by fantasizing about winning a duel in their living room. Others fear the aftermath of a prolonged natural (or man-made) disaster where fighting over — rather than sharing — food, water, and shelter becomes the norm.

To varying degrees, the odds would be stacked against us in any of those situations — just as they would be in a mass shooting. It’s only on the front end that we can improve our chances. The sooner we develop a genuinely compassionate and trusting society, the less likely any of us will find ourselves in such dire circumstances.

John Morlino is a former social worker and founder of The ETHIC (The Essence of True Humanity Is Compassion). He’s been writing about gun violence for more than a decade.
Distributed by OtherWords.org.