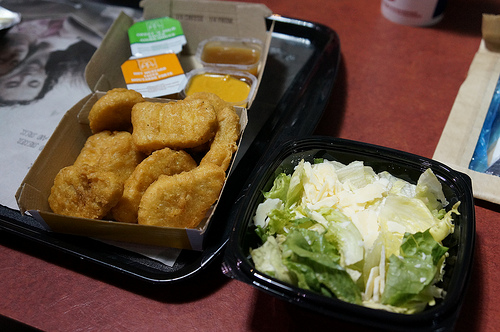 When McDonald's staged a gourmet feast, it reminded me of the time I judged a Spam cooking contest.
By Jim Hightower | September 23, 2014

Now here’s a dinner I wish I could’ve attended. I hear it was an elegant evening of fine dining in New York City’s chic Tribeca neighborhood.

Celebrity chefs prepared a sumptuous spread of international cuisines for this truly unique ballet for the taste buds. The feast was supposed to be “a transforming dining experience,” the Associated Press reports. 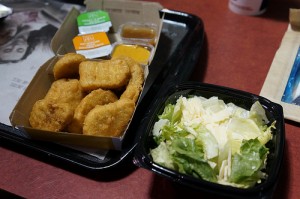 Actually, it was more of a mind-bending affair, hosted by McDonald’s.

And this isn’t a joke. The fast-food mega-chain of cheap eats used the dinner to make another stab at enhancing its image. This time around, it tried to convince reporters that its food is actually healthy, fresh, high-quality, and even worthy of gourmet dining.

Thus, guests (including journalists) were treated to such dressed up dishes as Kung Pao chicken made with the chain’s Chicken McNuggets, gnocchi derived from McDonald’s French fries, and a pumpkin-spiced dessert fashioned from its biscuit mix.

The closest I’ve come to such culinary pretension was years ago when I reluctantly agreed to judge a Spam cooking contest. This required choking down bites of Spam Fricassee, Coquille St. Spam, and Spam Spumoni. It was the food equivalent of dressing a pig in an evening gown.

Some things are simply what they are — and it’s best not to fancy them up.

All this smoke and mirrors and the rhetoric and stunts are supposed to create a single illusion. “We’ve got to make sure the food is relevant,” proclaimed McDonald’s CEO Don Thompson.

Get real! Whether trying to gloss over its exploitation of low-wage workers or its health-challenging Big Macs, the McDonald’s image won’t change until the corporation does.