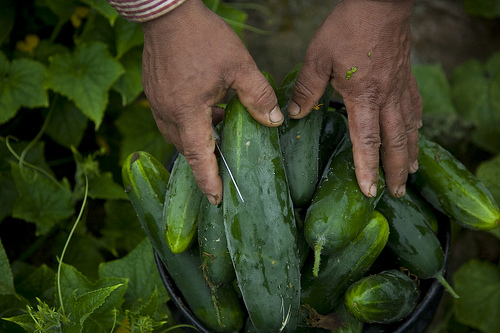 Another Side of the Immigration Debate

We reap the benefits of cheap farm and meatpacking labor in the form of low-priced food, thanks to the contributions of millions of undocumented workers.
By Jill Richardson | February 13, 2013

Until a few years ago, Rosa Acosta had never even seen a flush toilet. She raised her 12 children in a tiny adobe home in rural Jalisco, Mexico. Several of her kids left it to work in the United States. One son, who left at age 12 to earn money as a farmworker in California, returned home to Rosa and his siblings after only a year. Another, her oldest, still works in California’s fields. Neither crossed the border legally.

After two decades of backbreaking labor in California, her oldest son and his family still live in extreme poverty. Out of his meager earnings, he sends some money back to Mexico. For many years, he had never even met his youngest siblings who were born after he left, and his mother had never met his children, her grandchildren, as neither could easily cross the border.

The Acosta family is one of millions whose fate hangs in the balance as President Barack Obama tries to convince Congress that it’s time to overhaul our immigration laws. 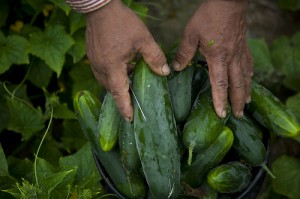 In Mexico, the poor have family, community, and some degree of independence if they have a bit of land. Known as “campesinos,” these small-scale farmers traditionally plant squash, corn, and beans in the same field. It’s a simple yet brilliant system: The squash plants suppress weeds, the corn provides support for the beans, and the beans keep the soil fertile. These crops together form the backbone of a sustainable and healthy diet with plenty of protein and vitamins.

The journey to the United States is risky and expensive. Some migrants die on the way. Many are separated for years, decades, or even permanently from their families in Mexico. Once they arrive they live in the shadows, where they’re easily exploited because employers can threaten them with deportation.

Why do they come?

For families like the Acostas, life changed after NAFTA. Following the enactment of the U.S.-Mexican-Canadian pact two decades ago, Mexico phased out benefits that traditionally protected its farmers and changed its constitution to break up traditional communal farms known as ejidos.

After NAFTA took effect, corn prices fell so low that the poorest farmers could no longer earn money by selling it. Tortilla prices simultaneously skyrocketed, gouging urban consumers. The impact was so significant that in Mexico’s southernmost state, Chiapas, an indigenous group known as the Zapatistas declared autonomy from the Mexican state in protest.

Life was never easy for poor Mexican families — but NAFTA made it much harder. Meanwhile, on this side of the border, we reap the benefits of cheap farm and meatpacking labor in the form of low-priced food, thanks to the contributions of millions of undocumented workers. And how do we express our gratitude? Far too often, it’s with racism, hatred, and the desire that all the estimated 11 million undocumented immigrants “go home.”

By enjoying the fruits of their labor — pun intended — every consumer becomes complicit in the exploitation of undocumented workers. Harassment, wage theft, and backbreaking work that can leave workers disabled are not uncommon.

Only by bringing undocumented workers out of the shadows can we help them gain safe labor conditions. After all, if our broken immigration system is fixed, employers will no longer be able to rely on the threat of deportation to keep wages low.

Improving the immigration system will require an educated debate. For starters, we must recognize the humanity of the folks who pick our fruit and process our meat. And we must examine how our own policies, like NAFTA, hurt their home countries, further spurring immigration here.