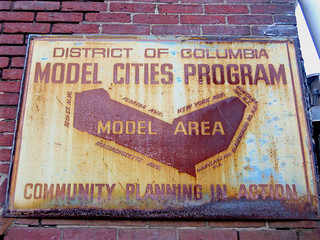 Another View of the Capitol

Now isn't the time to cut the supports the economy needs to grow again.
By Isaiah J. Poole | September 4, 2013

Four and a half miles due East of the U.S. Capitol is a neighborhood called Capitol View. It sits on a hill that offers that iconic view of the Capitol and the Washington Monument that symbolizes official Washington.

But the view feels less than majestic for the people who live in this neighborhood. This isn’t the Washington of power lunches, power ties, and power plays between lobbyists and lawmakers. This part of Washington, blocks from where I grew up, is where the ripples of the effects of ideological obstruction begin.

Unemployment in this section of the city averages around 12 percent. The median income is more than 30 percent below the national average of $50,000. The local government has been working valiantly to resuscitate the community, replacing dilapidated housing projects with rows of crisp townhomes.

Efforts to reduce crime and improve the schools are making a positive difference. But the progress is precarious, and the effects of an economy dragged down by Republican blockage of common-sense measures to boost the economy are taking their toll.

Aisha Peoples, a neighborhood resident in her early 20s with a preschool-age daughter, has been unable to find a good job for a year even with her recently obtained degree in criminal justice from University of Phoenix.

“It shouldn’t be that hard for us to get a job, but it really is hard,” she said. “I should be able to get a probation officer job, a parole job, a child protective services, or a police officer-type job. That’s what I’m looking for, you know, so I can take care of my family…With a retail job, you can’t take care of a family on $7.25 an hour.”

Peoples said she would like to see the federal government do more to encourage hiring and “pull for us to get jobs.”

“I am tired,” she said. “I am tired of applying for 50 jobs, 30 jobs and…nobody calling me back. That’s just devastating.”

Steve, a 51-year-old who didn’t want to give his last name, considers himself blessed for being able to get steady work in construction in spite of a felony conviction years ago. He attributes his success to his work ethic, but he also credits a local law that requires construction companies doing city-funded work to take extra steps to hire local residents.

He now wants to see more action to ensure that what jobs there are pay good wages. “Try to rent an apartment around here on a minimum-wage job,” he said. Even in this neighborhood, which has some of the city’s most affordable housing, a one-bedroom apartment rents for nearly $1,000 a month.

Even as the people in his neighborhood continue to struggle, Steve said he’s watched the rich and corporations profit handsomely in recent years. “It’s their turn to help,” he said.

In many ways Capitol View is like thousands of other working-class neighborhoods in hundreds of congressional districts around the country. But with Congress now in the midst of a titanic battle over the future of the economy that will come to a head this month, a quick trip to Capitol View would be a sobering reminder of what’s at stake.

As some Republicans threaten to allow the government to shut down or even default on its debt unless the Obama administration and Democrats agree to permanent long-term cuts in domestic spending, lawmakers need to adopt the prevailing perspective of Capitol View: Now isn’t the time to cut the supports the economy needs to grow again. People need to get back on their feet.

And the No. 1 priority is jobs — good jobs at decent wages.