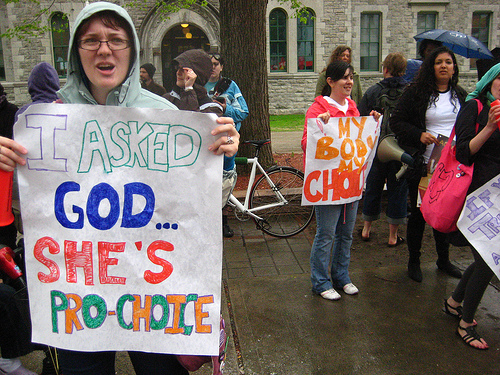 Reproductive rights foes are winning plenty of battles but losing the war over American opinion.
By Emily Schwartz Greco, William A. Collins | May 14, 2014

How did your state mark the 40th anniversary of the Supreme Court’s ruling that gave women the right to keep Big Government out of their uteruses?

If you live in North Dakota, your lawmakers banned abortion at six weeks — earlier than many pregnancies are detected. They refused to make exceptions for rape or incest. Do you live in Arkansas? Your statehouse didn’t go as far, but they banned abortion at 12 weeks with few exceptions. Federal judges deemed both measures unconstitutional but you can bet they’ll keep wending their way through the courts.

North Dakota and Arkansas are just two of the 22 states that passed a total of 70 abortion-restricting laws, chipping away at the legacy of the 1973 Roe v. Wade ruling.

The upshot of these kinds of laws and restrictions is that most women again must travel long distances to exercise their right to choose. One out of three U.S. women reside in the 87 percent of U.S. counties that lack abortion providers. Mississippi is on the verge of becoming the first state to not have a single abortion provider since 1973. It’s one of at least four states that have only one.

Is that what most Americans want?

Absolutely not. A Pew poll found that less than three in ten members of the public would like to see Roe ditched altogether. At least six in ten don’t want it overturned entirely, even if there is some support for restrictions on abortion rights.

Besides, reality is decidedly pro-choice: The number of abortions American women have each year is declining but remains above the 1 million mark. Three in ten women have one by their 45th birthday.

Meanwhile, Pope Francis is talking more about abortion these days. It turns out that he’s no more tolerant of women’s reproductive rights or marriage equality than the next pontiff, even if he’s not making these wedge issues a priority. 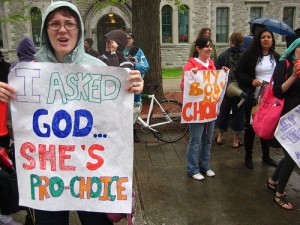 Yes, it’s great that Francis would rather focus on social and economic justice. He’s chided his flock for becoming too obsessive on issues like reproductive rights and marriage equality. “The church sometimes has locked itself up in small things, in small-minded rules,” he lamented last year. He then urged the Catholic clergy to focus harder on being “ministers of mercy.”

Guess what? American Catholics welcomed those remarks. Only 15 percent said Francis went too far, while 46 expressed support and 20 percent said they wished he would move the goalposts even further from where he found them when he became pontiff.

It also turns out that American Catholics are completely in tune with overall U.S. sentiments on outlawing abortion: More than six in ten support a woman’s right to choose, Pew found. Meanwhile, the only demographic group in which a narrow majority favors outlawing abortion altogether is white evangelicals. Clear majorities of black Protestants and white mainline Protestants oppose Roe’s overturn.

But that’s not stopping Catholic-managed U.S. hospitals from denying urgent medical care to pregnant women, even when they could die as a result.

Thanks to a series of mergers, health care at one in ten hospitals is delivered under the shadow of a cross. And when Catholic chains absorb secular providers, there’s no possibility of terminating a pregnancy, even if the woman’s life is endangered and either miscarriage or stillbirth is the inevitable result of delaying action.

That’s why the American Civil Liberties Union (ACLU) is suing the Council of Bishops over an incident involving Tamesha Means. When her water broke at the 18-week mark of her pregnancy, it became medically impossible for anything to be done to save the unborn baby she had been carrying, whether you call it a fetus or not.

Thanks to the directives distorting medical care at the Catholic-managed hospital where she sought care, Means “suffered severe, unnecessary, and foreseeable physical and emotional pain and suffering,” her lawyers asserted. The case is pending with a federal court in Michigan.

Clearly, public opinion and medical reality aren’t yielding in response to gains scored at the local, state, and federal level by die-hard abortion opponents. And the standard operating procedures at Catholic hospitals are endangering women’s lives. Isn’t 40 years of this enough?