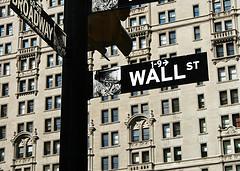 The executives responsible for the financial industry's pervasive fraud are paying no personal price.
By Sam Pizzigati | October 10, 2012

What should we, as a society, do with all those reckless financial industry execs who helped trigger the Great Recession and the tidal wave of foreclosures? Should we put these power suits behind bars? Or should we forgive and forget, and lavish down upon them hundreds of millions of dollars in new rewards?

Meanwhile, not one high-profile financial industry executive has yet seen the inside of a jail cell, despite massive instances of fraud at the firms they’ve been leading.

How widespread has this fraud been? The Securities and Exchange Commission, the federal watchdog over Wall Street, has so far “collected $2.2 billion in penalties, disgorgement, and other monetary relief from cases related to the crisis,” the New York Times reports.

And that total doesn’t count the $26 billion settlement with banks that the Justice Department announced last February — over fraudulent foreclosure practices — or any of the $536 million in credit card company refunds and penalties the new Consumer Financial Protection Bureau has won since July.

Capital One’s top five execs could pay a good chunk of that $210 million from the pay they pocketed in the one year the new Equilar study has tracked. From mid 2008 to mid 2009, these five Capital One execs received stock and stock option awards inititally worth $19.9 million.

The five execs, says a flack for Capital One, deserve all that reward. They “delivered solid results in 2009.”

Solid as smoke and mirrors. The five execs ran a company that bamboozled consumers. They parlayed a huge stock market rebound — fueled by taxpayer-financed bank bailouts — into immense personal windfalls.

But let’s not dwell on just Capital One. American Express recently agreed to pay $112.5 million in refunds and fines. The company, regulators found, has been charging illegal fees and reneging on discounts promised to consumers.

At the stock market low point in 2009, notes Equilar, Amex generously stuffed the pockets of its top five execs with options then worth $7.6 million. The current value of these options: $91.4 million.

Some of these execs, we now know, ran companies guilty of massive fraud. So why should we expect, asks consumer advocate Dennis Kelleher, anything but widespread fraud?

On Wall Street and elsewhere in corporate America, crime clearly pays. Back in the Great Depression, curiously enough, we took a different attitude toward Wall Street crime. The nastiest of America’s super-rich wheeler-dealers actually went to jail.

We don’t, of course, do prison trains anymore. But planes would do just fine.

OtherWords columnist Sam Pizzigati edits Too Much, the Institute for Policy Studies' weekly newsletter on excess and inequality and is the author of The Rich Don't Always Win, a book that Seven Stories Press will release in November. OtherWords.org