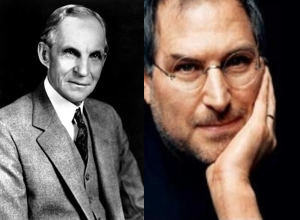 Above all, he brought an elegant sense of aesthetics to an industry that was, up to then, innocent of it.
By Donald Kaul | September 5, 2011

Steve Jobs has the rare privilege of attending his own funeral. Who among us hasn’t wanted to do that — to see who’s there, who’s not; who’s crying and who seems perfectly calm, even bored?

He’s not dead, of course, but ever since he stepped down as chief executive of Apple last month, people have treated him as though he were. Virtual obituaries, eulogies, and testimonials are flowing unendingly.

And I’m sure he’s pleased with the reviews. They’re very, very good. A visionary on the level of Henry Ford, they say. The greatest entrepreneur of his time. A business genius.

He didn’t invent the computer or the cell phone or the Internet. But he did bring them to the fingertips of the average person and make them a virtual necessity.

He was a hard-driving executive who hired brilliant engineers and drove them relentlessly to do things they didn’t realize they could do, all with the consumer in mind.

Above all, he brought an elegant sense of aesthetics to an industry that was, up to then, innocent of it. Just walking into an Apple store makes you feel cleaner.

Once, having been ousted as Apple’s leader, he bought Pixar. He developed it into the most innovative and best of the animated film companies and made himself another fortune in the bargain.

He owns nearly 300 patents, but his main skill was (there I go again — is) as a kind of editor. He worked with his teams to craft and shape their inventions to correspond with his signature style and unique vision.

It can be said that he transformed his industry and in doing so changed the way we live. Yet, even with all that, he was no Henry Ford.

Ford was born during the Civil War in 1863 into a world of horses and wagons, oil lamps and outdoor plumbing. By the time he died in 1947, just after World War II, it was in a world largely of his making, dotted with giant factories and crisscrossed with paved highways lined with cars capable of traveling 100 miles-an-hour.

It was a world of exploding suburban growth, with an interstate highway system just over the horizon and the decline of our great industrial cities just about to begin, victims of their (and his) success.

Ford didn’t invent the automobile any more than Jobs the computer. Yet, like Jobs, he brought his remarkable machine within reach of the average man and eventually made it all but a necessity of life.

In doing so he changed where we live, where we shop, where we work, and the very air we breathe. Parenthetically, he also did a lot for teenage sex.

Under Jobs’ leadership, Apple offshored most of its factory jobs to contractors employing hundreds of thousands of poorly paid Chinese workers.

Ford, however, championed the first auto assembly line, making his cars affordable for the middle class. Then he instituted the $5-a-day wage (worth about $110 in today’s dollars), allowing his workers to join that class.

It’s difficult to overestimate how shocking that was to the nation in 1927. The Wall Street Journal (no more far-seeing then than now) wrote that Ford had sown the seeds of the destruction of our society. Instead, the best workers flocked to his plant and he got richer, as did the rest of society.

Not all of the changes wrought by these two great men worked out for the better, unfortunately.

It can be said, if somewhat uncharitably, that Steve Jobs created gadgets that robbed our youth of their attention span, while Ford created an economic environment that, while it fueled the greatest prosperity the world had ever known, released forces that now threaten to destroy the planet through climate change.

Ford was a crank genius, a virulent anti-Semite with fascistic tendencies. He was undeniably a greater force for both good and evil than Jobs has been.

Still, for a guy who dropped out of college after one semester, Jobs has done all right for himself. There aren’t many Henry Fords in our history. Jobs came closer than almost anyone else.