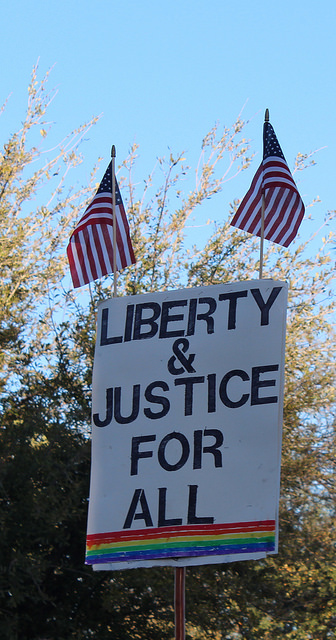 Arizona Swims against the Tide of Growing Equality

Gov. Brewer's veto of a measure that would have legalized discrimination against the LGBT community, atheists, and others was about capitalism, not compassion.
By Pamela Powers Hannley | February 26, 2014

The choice for Arizona Governor Jan Brewer was clear: “religious freedom” or the 2015 Super Bowl.

Just when it looked as if social conservatives would force the state into taking a giant leap backward in the fight for LGBT equality, Brewer vetoed a blatantly anti-gay bill.

Both chambers of the Arizona Legislature recently passed a bill that would legalize discrimination against gays and lesbians on the basis of religion.

Painted as a law to protect religious freedom, SB 1062 redefined “exercise of religion” and dramatically expanded the definition of a “person” to include “any individual, association, partnership, corporation, church, estate, trust, foundation or other legal entity.”

The measure would have allowed people and businesses with “sincerely held religious beliefs” to refuse to provide services or employment to anyone whose lifestyle is an affront to their religious beliefs.

The Arizona House passed the legislation after more than three hours of debate about religious freedom, discrimination, equality, and the measure’s potential negative economic impact. The vote fell largely along party lines. Every Democrat in the two chambers voted against it, joined by a total of three Republicans.

Although opponents found the bill to be unacceptably anti-gay, it could have been used to discriminate against other groups too, including atheists and others whose lifestyles may be considered outside of Arizona’s fundamentalist Christian mainstream.

Why are conservatives doing this across the nation? Is this a Hail Mary pass by the religious right to stop the progress of gay rights?

In Arizona, the anti-gay law was promoted by the powerful Center for Arizona Policy, a fundamentalist Christian group that lobbies against reproductive rights and gay marriage. The Center and similar groups nationwide are affiliated with Focus on the Family, a right-wing network promoting Christian values — including traditional marriage between a man and a woman.

The problem for Republican lawmakers, who now are facing a massive backlash over this vote, is that Arizona is a purple state being held hostage by a red state government, thanks to long-term gerrymandering. Arizonans — particularly those of us living in Phoenix, Tucson, and Flagstaff— are much more open-minded and accepting of LGBT lifestyles than the Republican majority in the legislature.

Most of us opposed this new law and the widespread discrimination it would codify. Gay-friendly city ordinances already on the books in multiple cities would have been overturned if SB 1062 had become law.

Gay rights advocates organized protests and called the governor urging a veto. A social media firestorm and major demonstrations flared up, with more than 1,000 protesting at the state capitol in Phoenix and several hundred protesting in Tucson. On social media, Republican lawmakers were labeled homophobic “religious bigots.”

Some legislators who voted for SB 1062 desperately tried to distance themselves from the decision, while progressives rejoiced at what they saw as a major tactical error by the GOP. Of the six gubernatorial candidates vying to replace Brewer in November’s election, the sole Democrat, Fred DuVal, was the only one who came out strongly against SB1062.

Did the pragmatic but sometimes unpredictable Brewer side with gay rights over religious freedom? No. She sided with business.

Fearing an economic backlash and potential Arizona boycott, both of Arizona’s U.S. Senators (John McCain and Jeff Flake), the Arizona Chamber of Commerce, and just about every major business group joined progressives in demanding a veto.

Arizona’s state government is no stranger to this kind of controversy. It opposed the Martin Luther King Jr. holiday, and its “papers please” anti-immigrant SB 1070 measure cost the state millions in lost revenue and sullied its image. Despite nationwide protests and widespread calls for a veto, Brewer signed SB 1070 into law four years ago and won re-election in its wake.

Brewer and Arizona’s business community learned a hard economic lesson after she signed SB 1070. Although I was heartened by the swift and unequivocal opposition to SB 1062, it wasn’t compassion and justice that brought it down. It was capitalism.

Pamela Powers Hannley is a progressive political blogger based in Tucson.
Distributed via OtherWords (OtherWords.org)