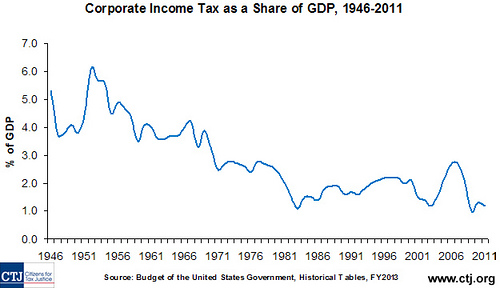 You can't deduct the cost of a speeding ticket, but corporations often deduct billion-dollar penalties for major fraud from their IRS bills
By Jim Hightower | July 29, 2014

Did you scramble to get your taxes done this year at the last minute? Yeah, me too.

I really didn’t mind paying what I owe — but I hate having to pay the taxes owed by the likes of JPMorgan Chase, ExxonMobil, and Amazon. They’re just a few of the astonishingly profitable corporations adept at minimizing their tax tabs. That shifts more of the cost of everything from the military to national parks onto our shoulders.

We constantly hear CEOs and their congressional hirelings wail about the “punishing” official tax rate of 35 percent assessed on corporate profits. But they’re grinning as they’re crying, for they know they actually pay nowhere near that.

In fact, the latest assessment by the Government Accountability Office found that U.S. corporations pay an average tax rate of only 12.6 percent, forcing workaday taxpayers to cover the multiple billions of dollars that these privileged elites dodge.

How do they do that?

Simple. They duck through ridiculous loopholes in our tax laws. How ridiculous? Try the subsidy for corporate criminals. If you get a speeding ticket, do you get to deduct the fine from the income tax you owe? Ha! Just try it.

But JPMorgan Chase was fined more than $20 billion last year for major frauds and consumer rip-offs, and its honchos have now deducted that “punishment” from the corporate tax bill, claiming it as a cost of doing business. Oh, they also get to deduct the many millions of dollars they paid lawyers to defend their blatant wrongdoing.

Well, sniff the elites, we’re merely making rightful use of the deductions allowed by tax laws. But it’s their lawyers who wrote those laws to legalize their thievery. And need I mention that they also get a deduction for the mega-salaries and expenses of those lawyers?

Yep, we all pay for their wrongdoings, their fines, and their lawyers.