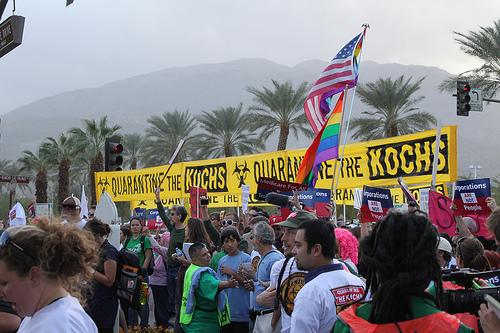 Attack of the Billionaires

Some 300 uber-rich corporate plutocrats and their political hirelings have pledged at least $100 million to bombard the Obama campaign with viciously negative ads.
By Jim Hightower | March 12, 2012

It was a total lockdown. As jet after jet swept in surreptitiously with top brass and political decision-makers on board, every entrance to the site of the super-secret Coachella Valley planning summit was secured and patrolled by armed guards and helicopters.

This wasn’t a clandestine gathering of America’s allies in Afghanistan, but a pow-wow of some 300 über-rich corporate plutocrats and their political hirelings — all intent on obliterating President Barack Obama’s re-election bid with an unprecedented deluge of viciously negative attack ads.

Hosted by the billionaire Koch brothers at the posh Renaissance Esmeralda golf resort in California’s Palm Springs desert in early February, the confabulees were mobilizing and monetizing what Charles Koch called the “mother of all wars.” That would be their self-proclaimed war to enthrone their ilk over workers, consumers, the environment, and democracy itself. 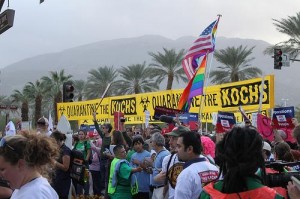 Who are these “warriors?” Billionaire casino baron Sheldon Adelson, Newt Gingrich’s sugar daddy, jetted in — as did Rick Santorum’s main money squeeze, Foster Friess, a hedge-fund richie and an extremist evangelical, as well as Mitt Romney donor Ken Griffin, a Wall Street speculator. How much monetizing of their “war” against you and me did these elites pledge? More than $100 million, including $40 million promised by Charles Koch and $20 million from his brother David.

We can thank five corporatists on the Supreme Court for enabling this elite few to put up unlimited, secret, corporate dollars to buy our democracy out from under us. They are the wealthiest .0000063 percent of Americans who — so far — have poured at least $100,000 each into SuperPACs to pervert our elections.

To help fight this corruption, go to www.United4ThePeople.org.