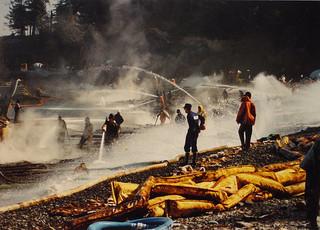 Avoiding the Next Arctic Oil Disaster

Twenty-three years ago, the Exxon Valdez ran aground on Bligh Reef and spilled over 11 million gallons of oil into the pristine waters and rich fishing grounds of Alaska’s Prince William Sound. Contaminating 1,500 miles of Alaskan shoreline, it was the largest oil spill ever in U.S. waters until the BP oil disaster in the Gulf of Mexico.

The Valdez accident killed thousands of birds, sea otters, whales, and seals. Many more were later harmed by the leftover oil, which lowered reproductive rates, stunted growth, and contaminated the food chain. The economies of the fishing villages impacted by the spill have yet to fully recover. To this day, if you dig in one of the beaches of Prince William Sound, you can still find oil.

We can’t afford to forget this tragic environmental disaster. Right now, oil companies are feeding fears of rising gas prices to boost their bottom line and support new efforts to drill in some of our most fragile habitats — including the Arctic’s Chukchi and Beaufort seas, known as the Polar Bear Seas.

Exxon’s Valdez disaster illustrated not only the risks of offshore drilling, but also the difficulty of cleaning up a spill in Arctic conditions. After weeks of effort and several failed attempts, Exxon only managed to clean up a small amount of the oil. 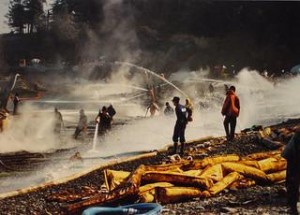 Two decades and many “advances in technology” later, BP was only able to clean up about 3 percent of the oil in the Gulf of Mexico after the Deepwater Horizon debacle. Similarly, sub-zero temperatures, shifting ice floes, and storms with hurricane-force winds ensure that a spill in the Arctic today remains impossible to handle. Yet Shell is pushing forward with plans to drill in the Arctic waters as soon as this summer.

The Exxon and BP disasters had ruinous and enduring impacts, even though the industry had assured us that such incidents could be prevented. This should give pause to the Obama administration, which recently approved an oil-spill response plan for Shell’s proposal to drill in the Arctic’s Chukchi Sea. That approval puts Shell one step closer to drilling in the pristine Arctic waters of the Polar Bear Seas.

The nearest Coast Guard station to the area Shell wants to drill in is more than 1,000 miles away. There are also huge knowledge gaps in scientific understanding about life in the Arctic waters and the potential impacts of drilling. The Chukchi is the Arctic’s westernmost sea. It supports approximately one-tenth of the world’s remaining polar bear population and is an important migration route for endangered bowhead and beluga whales.

The Arctic is home to more than just rich scenery and stunning wildlife. For the indigenous Inupiat people, the region sustains a way of life. They rely on subsistence hunting on land and sea for caribou, moose, whales, walrus, seals, and ducks, as well as salmon and berries, for their food. Their traditional whaling practice dates back thousands of years and forms the center of their diet and culture.

Big Oil’s dismal record for cleaning up after catastrophic spills belies its continued promises to take safety precautions. It continues to rely on unproven technology to reduce harm to irreplaceable the scenery and wildlife of the Polar Bear Seas.

We shouldn’t entrust the future of one of our last great wild places, and the communities that rely on it for subsistence, to Big Oil. President Barack Obama should permanently protect the wonders of the Polar Bear Seas, instead of opening them to drilling that will only deepen our addiction to oil.