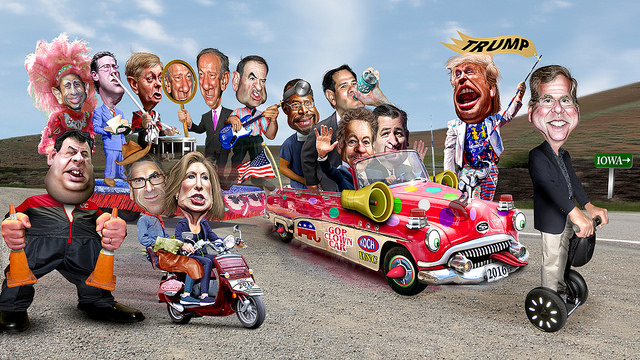 Away with the Clowns

The GOP race may be a circus, but the candidates are dead serious about padding the pockets of the rich.
By Karen Dolan | November 4, 2015

Is it me or are the GOP presidential debates getting more circus-like each time?

The recent CNBC “Your Money, Your Vote” debate began with this beauty pageant question: “What’s your greatest weakness?”

Who asks a bunch of narcissists that question and expects a real answer?

Well, the moderators of the latest debate did. If they somehow expected a strong crop of answers, they were sorely disappointed — hardly any of the candidates actually named one single weakness. From there on out, the ringmasters lost control of the circus.

But it’s not the moderators I’m worried about. What really scared me were the clowns on the stage.

In fact, these GOP candidates are why so many people find clowns terrifying. Each one is deadly serious about their plans to pad the pockets of the rich with tax schemes that twist their populist rhetoric into contortions worthy of Cirque du Soleil. It would be funny if it weren’t so alarming. 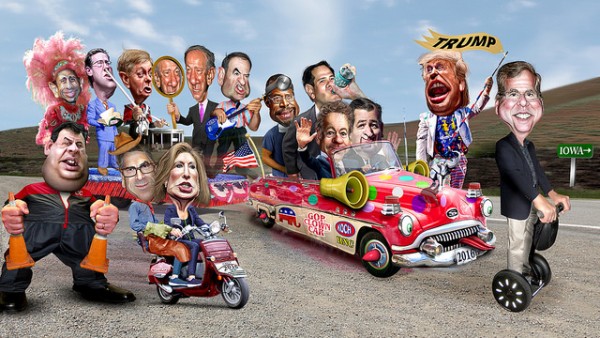 They employ populist rhetoric like “No hedge fund manager will pay less than his secretary,” or “Everyone gets a tax cut.” But a flat tax would generate massive tax cuts for the wealthy — and even a possible tax hike for those faring the least well in this rigged economy.

A 15-percent payroll or sales tax, after all, means a lot more to your bottom line than it does to a billionaire’s financial status.

Fired reality show host Donald Trump has trotted out plenty of populist rhetoric of his own. Yet after The Donald complained that “hedge fund guys” were “getting away with murder” on their tax returns, he rolled out a tax scheme that would cut taxes on the 1 percent by about $184,000 on average — compared to just $250 for the bottom 20 percent.

Jeb “Big Brother” Bush has also bragged about the fairness of his tax policy, which cuts taxes by $7 trillion over a decade. What he doesn’t tell you is that nearly half of those cuts go to the very wealthiest 1 percent.

Carly Fiorina finds tax justice easiest of all — just cut the number of pages of the tax code from 73,000 to 3, she says. She offers no further details, except that she’ll cut taxes and never raise them.

Even the clown who seems to have forgotten his red nose — Ohio governor John Kasich, the lone occasional voice of reason on the stage — has a tax plan that promises to balance the federal budget by choking critical social programs that keep tens of millions of Americans out of poverty.

Governing a country by giving more breaks to the uber-wealthy and hanging the rest of us out to dry is worse than a joke. It’s deadly serious.

Away with clowns. There ought not to be clowns.

Karen Dolan is a senior fellow at the Institute for Policy Studies and co-author of the report “The Poor Get Prison: The Alarming Spread of the Criminalization of Poverty.” IPS-dc.org.
Distributed by OtherWords.org.