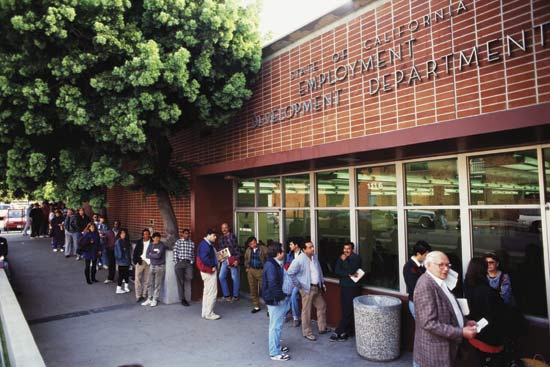 Lines outside an unemployment office in California

When processes are confusing, benefits lousy, and offices understaffed or underfunded, everyone loses.
By Jill Richardson | February 7, 2018

That is, I believe there are roles in society that can be best performed by a government — to serve the people, rather than a profit motive.

But I’m fed up. It’s like a crisis of faith. I’m trying to believe the best about the government, but the local bureaucracy seems determined to disprove all of my lofty ideals. Anyone who’s ever visited a DMV knows what I’m talking about.

In this latest go around, I’m attempting to apply for unemployment.

Here’s the scenario. I worked one semester teaching community college in the state of California. I was hired to teach a second semester — and then all of my courses were eliminated the Friday before they were supposed to start. I’d already put several hours into setting up online quizzes and writing my syllabus, and I was out of a job.

Since the semester started this week, there’s no hope of getting another teaching job right now. No school waits until classes already start to hire the teachers. So I filed for unemployment.

California has two methods of calculating your unemployment benefits, which they call “standard” and “alternate.” The standard version looked at my teaching income from September 2016 until September 2017. The alternate method would have included all of my wages through December.

Lines outside an unemployment office in California

How on earth does anyone in California live on $140 a week?

This is my second go around with California’s unemployment system. Last time it was like this: There’s no office to go to, and if you call the phone number, you get a message saying to call back later due to high call volume. Then it hangs up.

That was during the week. On weekends, miraculously, you could get a call through. Once you did, you found out why. The people answering the phones on the weekends had no access to the computer system, and they couldn’t help you.

This time around, the phone numbers don’t even work. You call, you hear silence, and the phone hangs up.

I have had equally frustrating experiences with California’s government when dealing with traffic tickets and food stamps. It’s like being trapped in a Kafka novel.

Some people say the problem is that the government should be run like a business. I don’t know. I’ve gotten equally frustrating “service” from mobile carriers and banks in the past. The difference is that you can switch phone companies or banks, but you can’t switch governments.

Whatever the problem is, it’s unacceptable.

The social safety net is necessary and beneficial. Unemployment benefits don’t just benefit the individual who receives them, because the individual turns around and spends the money at local businesses.

When processes are confusing, benefits lousy, and offices understaffed or underfunded, everyone loses. We need to fix it.