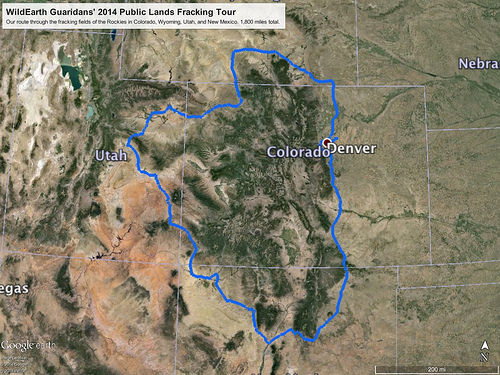 It's up to Congress to protect our national treasures.
By Wenonah Hauter | September 17, 2014

As world leaders get ready to gather in New York City for the United Nations Climate Summit, it’s time to take stock of how the United States is meeting its own climate challenges.

While the UN has the power to help forge a world with good jobs, clean air and water, and healthy communities, there’s one step that federal officials here in the United States can take on their own to curb climate change: They can ban fracking on federal lands.

The White House recently announced that it has begun to review the Bureau of Land Management’s (BLM) proposed fracking rules. Last year, the agency held a public comment period for the proposed rules. Advocacy organizations collected nearly 650,000 comments from concerned Americans calling on the Obama administration to ban fracking — a dangerous and controversial process used after drilling a deep well that involves injecting millions of gallons of water mixed with sand and assorted chemicals at a high pressure, to fracture tight rock formations and release oil or gas — on public lands.

The White House Office of Management and Budget’s seal of approval is the last step before the rules can be finalized — which would give the BLM a green light to continue offering up our nation’s most treasured public lands for oil and gas development at a meager $50 per acre, on average.

The Obama administration’s cozy relationship with Big Oil and Gas is no secret, and if business goes as usual, then the rules may be finalized. Fracking on public lands will only expand, subjecting the climate to the massive amounts of methane leaked during the process.

According to the International Panel on Climate Change, methane is 87 times more effective at trapping heat than carbon dioxide over a 20-year period. If President Barack Obama wants to halt the effects of climate change, why wouldn’t he prohibit fracking on public lands?

The BLM’s mission is “to sustain the health, diversity, and productivity of America’s public lands for the use and enjoyment of present and future generations.” But that agency can’t adhere to this mission if fracking is allowed on and near these lands. Moreover, our public lands are national treasures, and the millions of people who visit them every year don’t want them marred by industrial activity.

Fracking isn’t only an eyesore that will taint untouched landscapes with well pads, gas flares, compressor stations, and heavy trucks — it’s a threat to the environment, our health, and the climate. Countless studies show its detrimental effects: excessive methane emissions, well casings that are likely to fail and lead to water contamination, and earthquakes linked to wastewater injection wells.

The BLM oversees more than 700 million acres of federally owned lands, Native American lands, and national forests, many of which border treasured national parks. Some 38 million acres of public land are already leased for oil and gas development. The BLM has admitted it can’t adequately oversee the leases that are in effect today.

Earlier this summer, the Associated Press revealed that the BLM isn’t inspecting four out of ten of the new oil and gas wells on property it manages. According to the AP’s analysis of BLM records, between 2009 and 2012, 1,400 wells deemed “high priority” weren’t examined for potential safety violations. One BLM employee deemed these wells “a disaster waiting to happen.”

There’s no way for current regulations to protect public lands from the inherently dangerous effects of fracking. With the Obama administration failing to take action, it’s up to Congress to protect our national treasures. Banning fracking on public lands would mark a decisive step towards curbing climate change.

Wenonah Hauter is the executive director of Food & Water Watch and author of Foodopoly: The Future of Food and Farming in America. Foodopoly.orgDistributed via OtherWords (OtherWords.org)