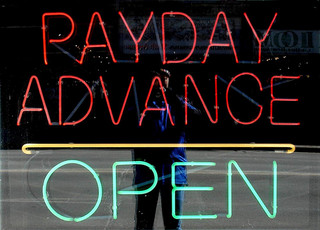 Banking on the Poor

Payday borrowers are trapped in a spiral of revolving loans and compounding penalties.
By Andrew Korfhage | May 1, 2013

What’s a fair interest rate to pay on a loan?

If you think a 300 percent annual percentage rate (APR) is no big deal, you can stop reading. But if you’d be outraged to learn that some of the country’s biggest banks — like Wells Fargo, Regions , US Bank, and Fifth Third — charge exorbitant triple-digit interest on their most vulnerable customers, you might want to read on.

The latest predatory schemes come with innocuous-sounding names like “Checking Account Advance” or “Direct Deposit Advance” from banks that offer direct-deposit services. They work like this: A bank provides a customer an “advance” on an upcoming direct deposit. When the funds appear, the bank immediately pays itself back, plus a fee.

The short term of the loan (a matter of weeks) combined with the huge size of the fee, usually pencils out to an APR between 225 and 300 percent. Even worse, if the borrower’s deposit can’t cover both their loan and other expenses, typically the bank pays itself anyway, triggers an overdraft, and simply pockets a second fee.

Ironically, banks have pitched payday loans to their customers as a way to avoid costly overdraft fees. But a recently released report by the Center for Responsible Lending exposed the emptiness of this enticement.

The organization reports that payday loan software consultants have assured the mega-banks not to worry about “overdraft revenue cannibalization,” and they’re right. CRL reports that the opposite is true: Payday borrowers are twice as likely as all bank customers to incur overdraft fees.

All of this traps payday borrowers (a quarter of whom are Social Security recipients, according to CRL) in a spiral of revolving loans and compounding penalties. CRL found the median payday borrower took out at least 13 payday loans in 2011. Taking out 20 or even 30 loans a year isn’t uncommon.

Payday schemes prey on those least able to throw money away like this. Such abuse demands stronger regulation.

Currently, 13 states either ban the practice of storefront payday lending (which doesn’t apply to the mega-banks), or cap APRs for all lenders far below 300 percent. And for some borrowers, the federal government sets the standard. In 2006, after a Defense Department study found returning veterans vulnerable to predatory payday lending, Congress made it illegal to charge more than 36 percent APR on loans to military families.

Through creative loan structuring, banks evade the letter of all of these laws, issuing their super-high-interest-rate products to anyone they want, and anywhere they want.

To close the loopholes exploited by the banks, more than 250 organizations — including the AARP and the NAACP— have called for government action. They’re starting to get results. On April 23, the FDIC and an office of the Treasury Department issued guidelines which, if adopted and fully enforced, would begin to limit the frequency of payday loans.

That’s an OK start, but the guidelines are both non-binding and insufficient. The Federal Reserve Board should bring direct-deposit advances in line with state laws governing payday loans and with federal laws governing military lending. Then, Congress should go further and extend the 36 percent APR cap for military families to cover all borrowers.

These CEOs and their cohorts draw their salaries and other supersized compensation from profits inflated by taking advantage of customers so desperate they need a loan to make it from paycheck to paycheck. They should be ashamed.

It’s time to crack down on payday lending by the mega-banks.