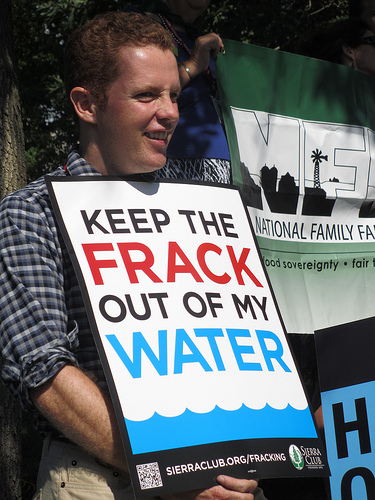 Ask anyone who’s lived through California’s drought: Water scarcity is getting scary. And banning long showers isn’t even a drop in the bucket when it comes to finding a solution.

The biggest water sponge by far is food production, yet agri-giants continue to douse their vast fields like there’s no tomorrow. Do you know how much water today’s industrialized food system sucks up?

Just one little almond takes 1 gallon. A single walnut? 2 gallons. A head of lettuce? 12. A cluster of grapes clocks in at a whopping 24 gallons.

Here’s the worst part: Big Oil says not to worry, because it can offer a gusher of H₂O to food producers. Believe it or not, companies are now selling their fracking wastewater to agribusiness for irrigating fruit and vegetable crops.

This is water that ExxonMobil and other drillers mix with a witch’s brew of some 750 toxic chemicals before power-blasting it into underground rock formations.

The drillers have had to reclaim and store this contaminated water, but — “eureka,” as someone must have shouted — rather than store it, they decided to spray it on America’s fruits and vegetables.

It’s perfectly safe, the always-trustworthy oil industry tells us, because they treat the water to remove all the nasty, cancer-causing chemicals they use first.

But studies have discovered toxins remaining in some of the “treated” water too, and a California science panel found that state regulators have no adequate testing process, nor any controls in place, to stop the contamination of crops.

Fed up, California Assemblyman Mike Gatto has introduced a bill to require warning labels on all state produce irrigated with fracking water. This would empower consumers, rather than Big Oil, to decide whether fracking chemicals belong on our families’ dinner plates. For more information, contact: www.WaterDefense.org.