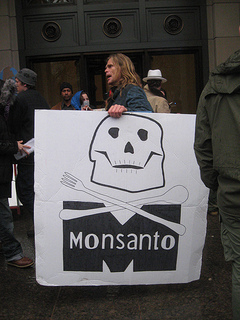 Just because Monsanto has patents and lobbyists doesn't mean that it should be allowed to wriggle out of our system's checks and balances.
By Jill Richardson | April 10, 2013

As this spring began, another branch in the biotech giant Monsanto’s sweep around any meaningful regulation of its products burst into bloom. Monsanto and its fellow “Big Six” pesticide and biotech companies — Syngenta, Dupont, Bayer, BASF, and Dow Chemical — pulled off a legislative coup when Congress passed its latest budget bill with a gift to them quietly (and anonymously) tucked into it.

As comedian Jon Stewart put it, “the laws of the most powerful nation on earth are written with the same level of accountability as Internet comments.”

This new law — quickly dubbed the “Monsanto Protection Act” by its critics — was snuck into the routine spending measure. After President Barack Obama signed it, Politico discovered that the “anonymous” lawmaker behind the provision was Roy Blunt. The Republican senator represents Missouri, Monsanto’s home state.

Biotech companies produce the seeds of genetically engineered crops that have genes of another species tucked into their DNA. The foreign genes give the plants new traits, like the ability to manufacture their own insecticide.

These newfangled varieties of soy beans, corn, and other crops are found in an estimated 70 percent of our food supply. Yet, most Americans are unaware of them because they aren’t labeled.

In fact, the biotech industry’s strategy around genetically engineered crops has avoided a meaningful national debate from the start. It began in the 1980s when companies like Monsanto first began working on these “crops of the future.” They’ve ensured a relatively easy path for themselves.

Our government even works to influence the legal systems of foreign countries to increase the adoption of genetically engineered crops in other nations. And the biotech companies themselves prohibit any independent studies of their products by scientists.

When the legislative and executive branches fail to protect consumers, the judicial system should set things right. That’s what checks and balances are for.

In the past decade, Monsanto’s been making regular Supreme Court appearances to defend its genetically engineered crops. Luckily for the Big Ag giant, its old lawyer, Clarence Thomas, is one of the justices. And, he doesn’t recuse himself from their cases.

Despite a massive legal budget and tight ties to Justice Thomas, Monsanto has suffered some Supreme setbacks. Two of the lawsuits involved their products — sugar beets and alfalfa — that were genetically engineered to survive being sprayed by Monsanto’s bestselling herbicide, Roundup.

In both cases, the courts decided that the Department of Agriculture hadn’t performed the necessary environmental review before legalizing Monsanto’s products for commercial sale. The government had to go back and do its homework before it could give Monsanto the green light. Monsanto had to stop selling its products — if only temporarily.

But while the government performed the environmental reviews, some farmers had already bought — or even planted — Monsanto’s seeds, which were now no longer legal to sell. Would the courts make those farmers rip their crops out of the ground? They didn’t. In both cases, farmers who had already purchased and planted Monsanto’s seeds were allowed to grow them, harvest them, and sell them, even though new sales were prohibited.

Of course, the losses in court were setbacks to Monsanto and to their friends in the government. But the courts based their decisions on the law, and the laws were written to protect the American people and the environment. Monsanto’s solution? Change the law.

Thanks to the “Monsanto Protection Act,” the next time a court finds that the Department of Agriculture wrongfully approved a variety of genetically engineered seeds, the court will be 100 percent powerless to stop any further planting.

Our laws were established for a reason. Following them should be required, even for companies selling the latest new inventions. Just because a company like Monsanto has patents and lobbyists doesn’t mean that it should be allowed to wriggle out of the American legal system’s checks and balances.