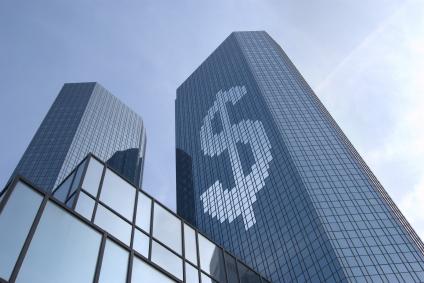 This virtual abandonment of local economies by Wall Street exploded when Uncle Sam bailed out the big banks.
By William A. Collins | November 21, 2011

Wall Street Bankers,
In the pink;
Forcing Main Street
To the brink.

When grouchy columnists write of the pernicious effects of banks on the economy, we’re generally not referring to your local county bank whose vice-president coaches your son’s Little League team. No, we mean the big guys whose vice-presidents commute to Wall Street from Greenwich, Connecticut and whose kids attend fancy boarding schools.

We mean the banks that may not have branches at the mall, but speculate in oil futures, thus driving up gas prices. We mean the banks that trade in worthless mortgage-based securities to puff up their short-term profits and buy up turnpikes to bail out bankrupt states. Then they jack up the tolls and skimp on maintenance. They also traffic in unregulated and favorably taxed derivatives. Those guys 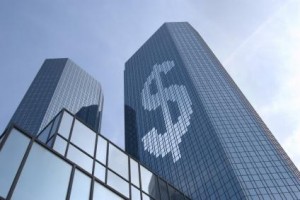 Sure, local banks can be shady or even stupid. But if they cheat, at least their officers might get arrested. If they fail, their bones are handed to the big banks to pick clean.

And unlike their megabank competitors, sometimes local banks even make loans to local businesses.

Remember that $700-billion Wall Street bailout in 2008? It was supposed to keep credit available for Main Street, but it has apparently had the opposite effect. The bailout’s two biggest recipients, Bank of America and Citigroup, have dramatically scaled back their local lending — by 94 and 64 percent, respectively.

The big banks apparently don’t need any business from mom-and-pop shops. There’s more money, after all, in speculation.

There was a time, however, when big banks weren’t allowed to engage in creating securities or in other such forms of manipulation. That principle was legislated in the Glass-Steagall Act, one of the many innovations spawned by the Great Depression. But big banks always sought to rid themselves of that annoyance. President Bill Clinton, seeking favor with the rich, went along at last. Thanks a lot, Bill.

Now, although we’re mired in the worst economic crisis since the Great Depression, there’s been no comparable flurry of reform. Last year’s Dodd-Frank Act would impose some modest improvements, notably the creation of a Consumer Financial Protection Bureau, but the Republicans won’t let President Barack Obama appoint anyone to run it.

Such behavior might give you the idea that the big banks are influential in Washington. Very perceptive! Naturally, they bankroll battalions of lobbyists to negate reform. And now that the Supreme Court has decreed that corporations are people, giant companies can spend freely to influence congressional elections. It’s like the Roaring 1920s all over again, at least for banks.

Bonuses are back up to pre-recession levels. As are profits, or they were until the economy recently went so sour that even the speculation business took a hit. But not to worry: Goldman Sachs CEO Lloyd Blankfein’s total 2010 compensation package bulged to $21.7 million.

Meanwhile, Congress is paralyzed, Obama is being wimpy, the Securities and Exchange Commission is off golfing, and New York Attorney General Eric Schneiderman, a strong consumer advocate, was thrown off a multi-state panel seeking a nationwide foreclosure settlement with the big banks.

Iceland is actually arresting bankers for similar shenanigans. But here, government is our bankers’ best friend. Some members of Congress even go to work for them when they retire, believe it or not.